With its neat rows of houses, wide, clean roads and spacious squares, there is little in Aihu, a village in the eastern province of Shandong, to remind older residents of life during their childhoods. 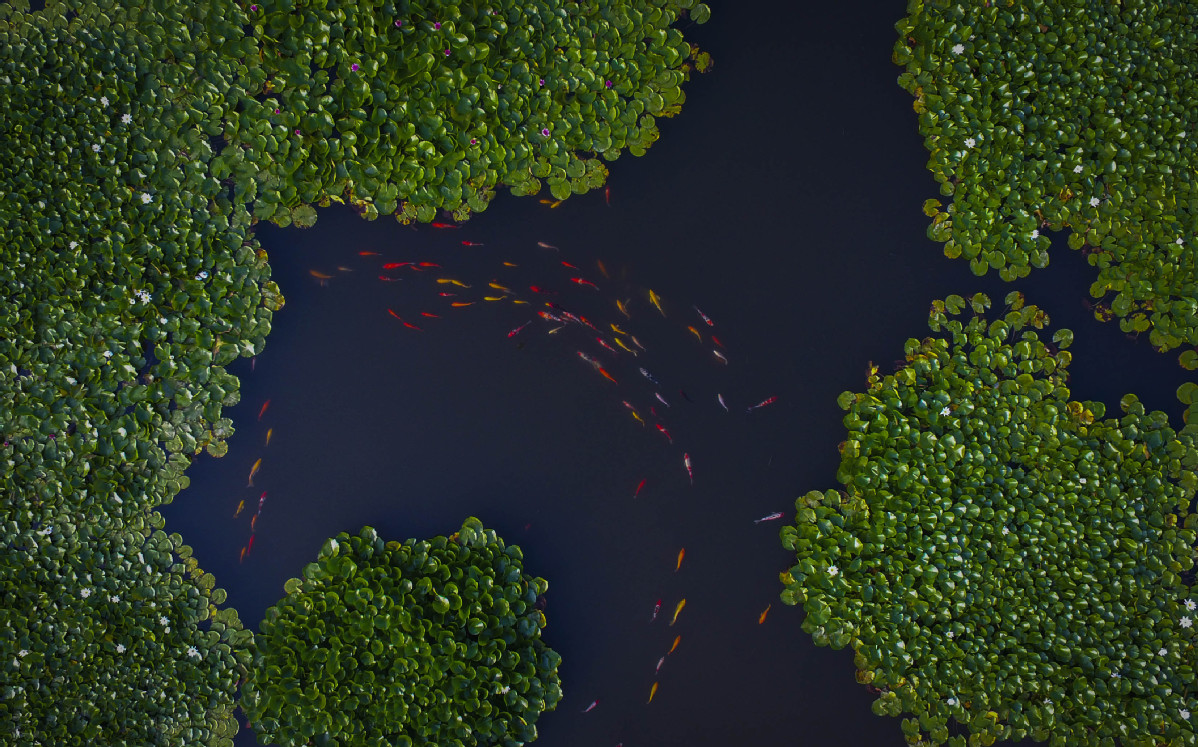 "Tremendous changes have taken place in our village; the bumpy mud roads have been replaced with wide, sealed ones, and electricity and the internet are available all the time. When I was a child, I never expected that one day I would have such a modern, convenient life," said Hu Qianle, a resident of Aihu in Weishan county, Jining. The village's name means "Love the lake".

However, one thing frequently takes the 58-year-old back to his childhood memories - the lake on whose shores the village stands.

"Our village has witnessed better and better changes, but the lake has seen both bad and good changes. Nothing makes me happier than knowing the condition of the lake is now as good as when I was a child," he said.

Hu was talking about Weishan Lake, the largest of four interconnected bodies of water - the others are Zhaoyang, Dushan and Nanyang lakes. Together they form the largest freshwater lake system in North China, which serves as an important part of the South-North Water Diversion Project.

"Now, when I row a boat to collect lotus seeds and catch fish, it seems as though I am back in my childhood," he said.

"When I was a child, the water was so clean that we could see fish swimming down below. There were also lots of plants, such as wild water chestnuts, growing in the lake. The lake provided us with food. Even during the hardest times, few people around the lake ever starved. We lived on the lake."

Hu spent his life on the rich, beautiful lake until the 1980s when the water quality started to deteriorate as papermaking factories and small chemical plants discharged pollutants directly into the water.

His memories were echoed by Zhou Shengdou, the village director, who said: "At that time, making money was the top priority. People didn't have a sense of protecting the environment."

A video clip from 1988 shows sewage being discharged into the lakes and their feeder rivers, turning the water black and leaving some areas covered with foam.

"The polluted water caused the plants and fish to die, leaving nothing for us to eat," said an elderly man in the video.

Wang Yun has worked at the Weishan county ecology and environmental department since the 1980s.

He said that in the late part of the decade and the early '90s thousands of factory outlets were scattered around the lakes and the 53 rivers that feed them, discharging untreated sewage directly into the waters.

"The lake water stank. What I was most afraid of were complaints from villagers about the pollution killing their fish. It was heartbreaking to hear the complaints," the 54-year-old said.

As there was no way of making a living from the lakes, many people moved into the shipping business on the Grand Canal.

They transported construction materials, coal and glass from the north to provinces further south. 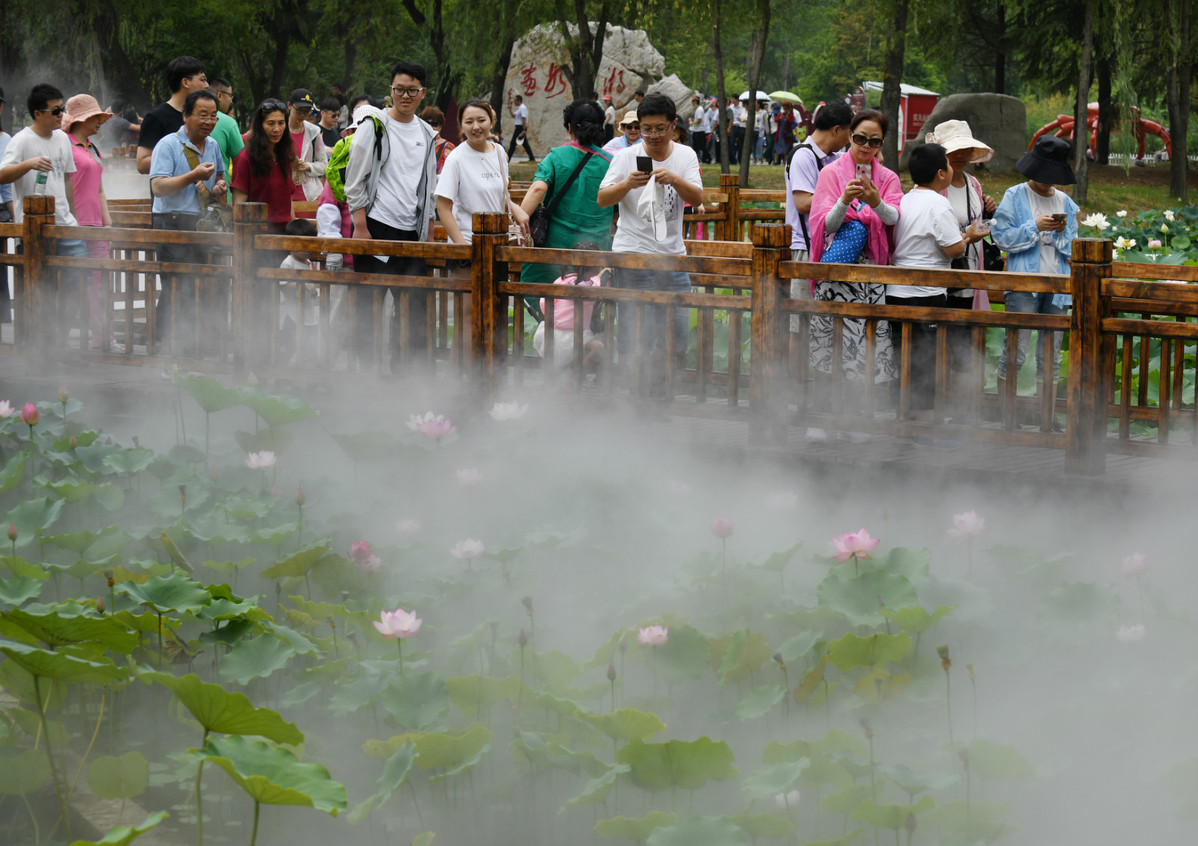 Tourists visit the lake during the lotus flower season in July.

In 1980, the local government decided to tackle water pollution, and started by fining companies that discharged pollutants.

"We only collected 16 yuan from the pollution producers in the first year," said Wang, adding that the fines were quite low at the time. "To be honest, I didn't have any confidence in treating pollution in the entire lake."

In 1996, taking advantage of opportunities presented by the official campaign to clean up the Huaihe River, one of China's largest waterways, the battle against pollution in the four lakes was given fresh impetus.

As a result, more than 20 papermaking plants, coal-fired power generators and fertilizer and cement factories were demolished.

In 2003, when the lakes were listed as part of the South-North Water Diversion Project, the county cleared 12,900 hectares of enclosures used for fishing because an ingredient in the fish food caused pollution.

In addition, pollution-producing projects were not allowed to be established within designated areas around the diversion project.

Newly built plants had to be equipped with systems to treat pollutants and reduce the effects of discharged sewage.

"In addition to the normal methods of treating pollution, we created a large expanse of wetland to filter sewage before it flows into the lakes," Wang said.

Wetland plants were planted across 4,000 hectares of shallow land alongside the lakes, providing an efficient way of filtering harmful elements contained in sewage, she added.

According to the county's ecology and environment bureau, after almost three decades of pollution-treatment efforts, the water quality in the lakes has recovered to the levels seen during the 1970s, and more than 50 species of fish and 70 types of plants are living and growing in them.

The lakes and the surrounding areas have been listed as a provincial-level nature reserve area, which means measures to protect the environment will be long-lasting.

"Now, children can jump into the lake as we did when we were young," Hu, the villager, said.

The improved environment has brought many long-departed villagers back to their home area to start businesses.

"I am raising fish and crabs in ponds alongside the lake with ecologically sound methods," said Zhou, adding that he made about 200,000 yuan ($28,000) from his business last year.

Jin Can, Party secretary of Aihu village, said the residents cherish the hard-won improvements, because the environmental degradation caused suffering.

"We have built a sewage-treatment system in our village that is designed to treat 50 metric tons of sewage each day," Jin said.

He added that a growing number of visitors are traveling to the village to appreciate the lakeside scenery, so the residents have established a tourism company.

"We have also registered brands for local products such as lotus seeds. Sales have grown on our e-commerce store on Taobao since it opened in August," he said. 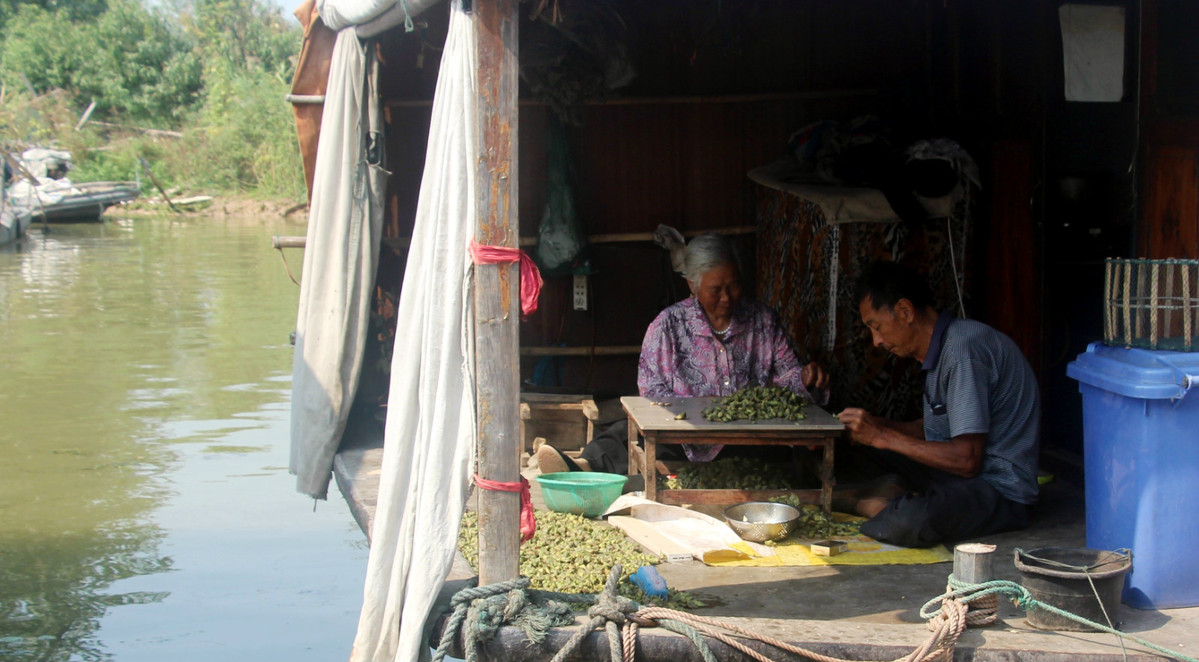 Environmental protection work has prompted the county to transform its industrial structure from coal production and papermaking to new energy and pharmaceutical industries, as well as the cultural and tourism sectors.

"The lakes have injected vigor into the local tourism industry," said Zhu Sumei, deputy director of the Weishan county culture and tourism department.

She said the county is building a culture and tourism-featured economic area around the lakes to develop tourism into a pillar industry.

As the transformation continues, some residents, especially those living on islands, are anxious about their livelihoods because they have had to return their ponds to the lake in a bid to keep the water clean. However, they will all receive compensation.

Jin said the local government is providing skills training for residents to help them find jobs, such as teaching them to make artworks from wheat straws, a popular form of handicraft on the art market.

Hu, the villager, said: "The lake is a kind of lifeblood for those of us who live on it. We all know what it means to us, especially after losing it once. Protecting the lake is undoubtedly our top priority now."