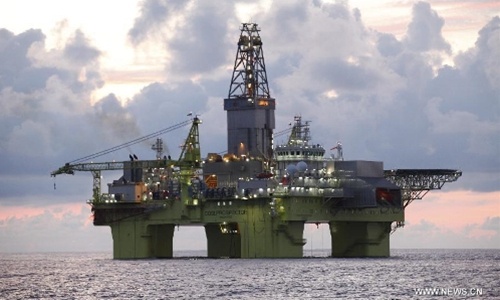 China's largest domestically designed offshore oil platform, Lufeng 14-4 central platform completed deployment, and will be put into operation at the end of 2021, according to a statement by the China National Offshore Oil Corporation (CNOOC) released on Wednesday.

The platform will provide stable oil and gas supplies for the Guangdong-Hong Kong-Macao Greater Bay Area.

The platform located in the South China Sea about 200 kilometers southeast from Hong Kong Special Administrative Region, and the structure's weight is equal to three Eiffel Towers.

The assembling of the platform is challenging due to connection between the 15,000-ton-upper part of the platform and the bottom tubes must be done by the floating assemble techniques which makes use of tide power.

After 10 years of development and research, China has overcome barriers of floating assemble technique which has low cost and high efficiency, putting China in a leading position in erecting offshore oil platforms in the world.

The platform will be used in mining oilfields of Lufeng 14-4 and 14-8, which will be included in the Lufeng oilfield group. CNOOC said that its domestic offshore oil and gas output surpassed 65 million tons in 2020, and vowed to accelerate oil and gas production during the 14th Five Year Plan 2021-25.