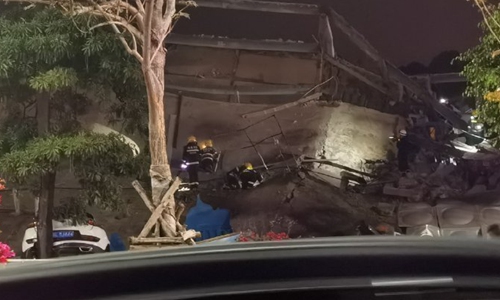 The collapsed hotel building in Quanzhou, East China's Fujian has been confirmed as a local medical observation site for holding the people who are undergoing quarantine after arriving from other regions hit hard by the COVID-19 outbreak, authorities said Saturday.

The Office of the Work Safety Commission under the State Council has sent a working group to the site to help with the rescue work. The cause of the collapse remained unknown.

One of the witnesses surnamed Wu told a local media Fujian Daily that his residence is opposite to the hotel and he heard a loud noise when he had dinner at home. He said he thought it was an explosion, but when he ran to the balcony, he saw the entire building collapsing.

An employee of a cake store beside the hotel was also a witness. "After hearing the loud noise, I ran out of the store and could only saw the dust on the street. When the dust settled, I found the building had collapsed," he told the Caixin.com.

The employee said that the building collapsed like a chopstick falling slantwise to the ground, "it happened very suddenly."

The hotel was surrounded by many car repair shops and 4S stores, according to local residents.

All-out efforts are being carried out for the rescue at the hotel to minimize casualties and prevent secondary accidents, officials with the Ministry of Emergency Management said.

The ministry also urged to launch a probe to the cause for the collapse.

The collapsed hotel was opened in June 2018 with 80 guest rooms, media reports said.