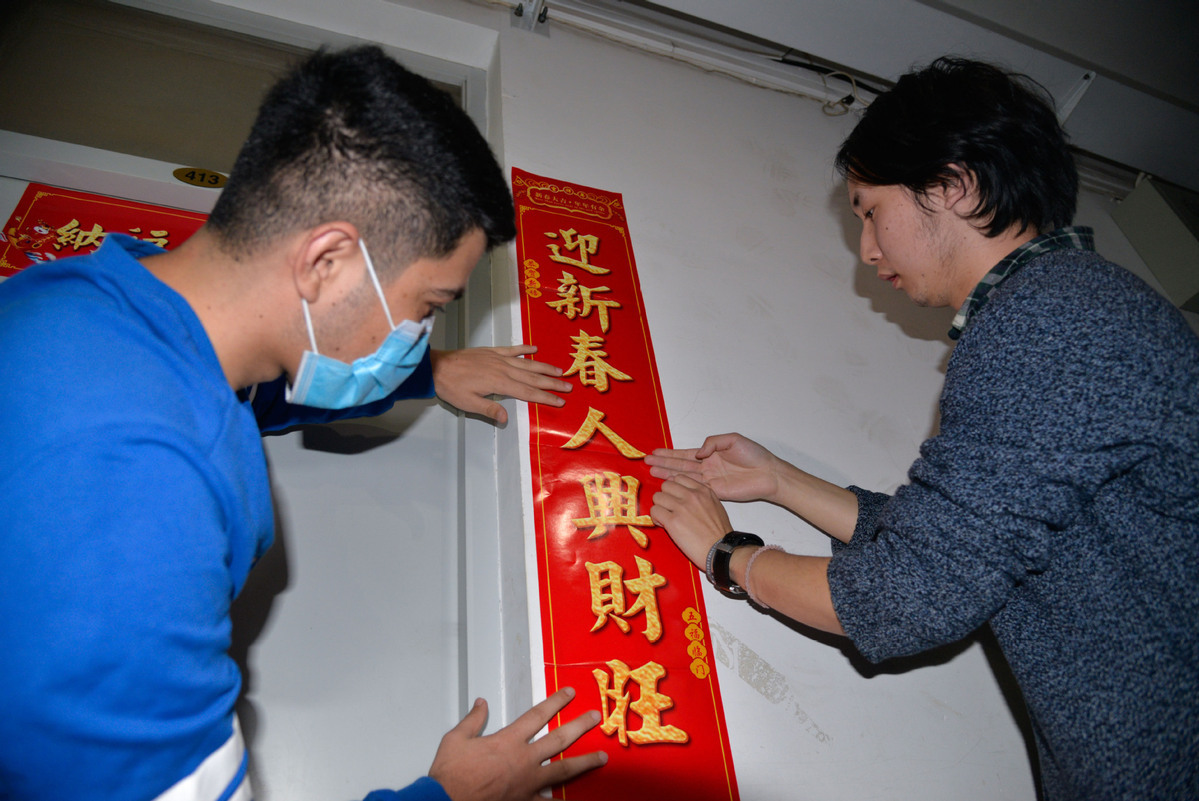 On Lunar New Year's Eve, Zhao Tianyang, a senior student at Renmin University of China, put up a pair of couplets and calligraphy depicting fu, the Chinese character for good luck, on her dormitory door.

"It's my first time spending the holiday away from home, and rituals need to be preserved," the 24-year-old from Jilin province said.

Zhao wrote the fu herself along with her wishes for a smooth graduation process in the new year. The couplets were written by calligraphers at an event organized by the university to celebrate the Little New Year, which usually occurs one week before Spring Festival.

With the country encouraging people to stay put during the year's most important traditional Chinese holiday to contain COVID-19 risks, college students in China who remained on their campuses found new ways to celebrate the festival with classmates and faculty and with their families online.

The number of students spending the holiday on campus was expected to quadruple this year compared with an average year, said Wang Dengfeng, a senior official with the Ministry of Education. Universities and colleges were asked to implement antivirus measures, ensure students' well-being, and provide for their study and leisure needs during the holiday, he said.

Luo Jianhui, director of the department of student affairs at Renmin, said 1,181 students chose to stay on campus during Spring Festival, and the university took measures to make sure the students could enjoy a safe and unforgettable holiday away from home.

As Chinese people traditionally hold a family banquet on Lunar New Year's Eve, university canteens provided free, specially designed meals that night and the next day for all students remaining on campus, he said.

Zhao said her gift package, which she received before Spring Festival, included snacks, soft drinks, a calendar, an ox doll and some epidemic prevention and control materials.

"All the arrangements make me feel at home, and it feels good to feel the warmth of the school and have people care for us," she said.

After ordering hotpot takeout and collecting a free meal from a university canteen, Zhao celebrated Lunar New Year's Eve with one of her roommates, watching the CCTV Spring Festival Gala on an iPad.

"Although there was only two of us and the screen is much smaller, there was comfort in knowing that my family was also watching the gala," she said.

Many Beijing universities found ways to create entertaining, safe and warm environments for students during the holiday.

Peking University launched a 24-hour hotline, designated contacts and arranged one-on-one chats for students and teachers staying on campus during the festival, it said.

Wei Jiaxi, a PhD candidate at Renmin from Shanxi province, said he chose to stay on campus to write his dissertation. He kept a very busy schedule during the winter vacation, doing research and reading literature during the day and exercising at night.

"It's just the normal school life for us doctoral students. Nothing changes," said Wei, 27.

Wei said teachers and student counselors talked with him often to see if he had any needs, and he participated in various activities organized by the university to celebrate the Spring Festival holiday.

"My parents sent me some local food, I held video chats with them via WeChat every day," he said.