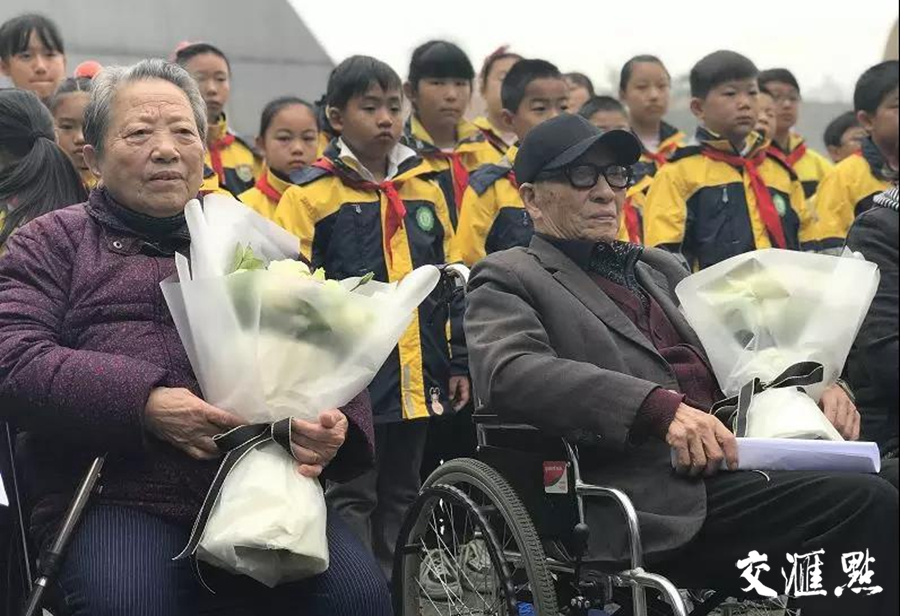 Survivors of the Nanjing Massacre Shi Xiuying (L) and Yu Changxiang mourn the victims at the memorial hall for the massacre victims in Nanjing, east China's Jiangsu Province, on December 3, 2018. (Photo: jschina.com.cn)

NANJING, Dec. 3 (Xinhua) -- Standing in front of the Memorial Hall of the Victims in Nanjing Massacre by Japanese Invaders, Shi Xiuying sobbed and read a letter dedicated to the family members she lost in the atrocity.

"Dear dad, brother, it's been 81 years since we've been apart, but I have been talking to you in my heart, can you hear me?" Shi read.

Starting Monday, family members of the victims of the massacre began a series of commemoration activities such as laying flowers, burning incense and reading letters before the memorial hall wall where the victims' names are engraved in Nanjing, capital of east China's Jiangsu Province.

Shi, 92, said her father was killed by Japanese invaders 81 years ago.

Another survivor, Yu Changxiang, 91, said his father was killed, but his body was never found.

"The name on the wall is the only way we can mourn him," Yu said.

"My father always says we should tell the history of the Nanjing Massacre to young people so we will remember the past and cherish our present life," said Yu Huiru, daughter of Yu Changxiang.

"So many people lost their lives, relatives, and families in the Nanjing Massacre. We must remember the trauma the Chinese people suffered, and cherish the hard-won peace," said Lu Jinghan, a student from No.1 primary school affiliated to Nanjing Xiaozhuang University.

In February 2014, China's top legislature designated December 13 as the national memorial day for victims of the Nanjing Massacre. Family members of the victims also started to hold commemoration activities at the memorial hall in December the same year.