Commemorative event for International Day of Peace held in Nanjing 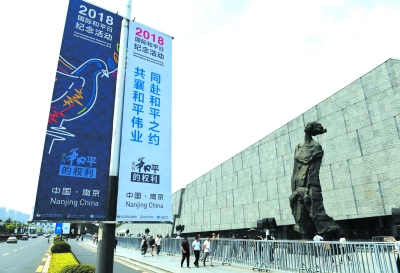 BEIJING, Sept. 19 (Xinhua) -- President Xi Jinping said Wednesday that China would "unswervingly take the road of peaceful development and remain a builder of world peace, a contributor to global development and a defender of the international order."

Xi, also general secretary of the Communist Party of China Central Committee, made the remarks in a congratulatory letter to the commemorative event in Nanjing marking the 2018 International Day of Peace.

Xi extended a warm welcome to the participants of the event, wishing it a complete success.

Pointing out that peace has been universally aspired after and pursued by human society, Xi said that peace and development had become themes of the times, but countries still faced increasingly complex security threats and the lingering threat of war.

"The Chinese nation loves peace and the Chinese people know well the value of peace," Xi said, adding that China was committed to peaceful development.

Xi said the commemorative event had become an important platform for all parties to enhance cooperation in security governance and unite global forces for peace.

This year's commemorative event is themed on working together to build a community with a shared future for humanity and a world of lasting peace and universal security.

Xi said the theme was in line with the founding principles of the International Day of Peace and was in the fundamental interests of all countries and peoples.

Xi called on those engaged in the activities to pool their wisdom and strength, build consensus and contribute to the building of a community with a shared future for humanity and a better world.