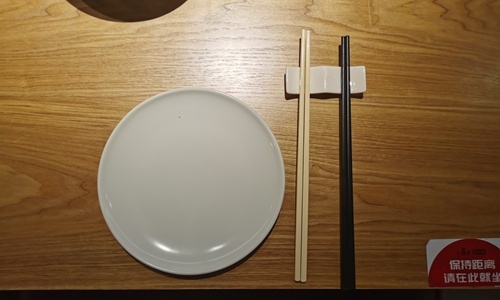 Two pairs of chopsticks in different colors are provided to customers in a Beijing restaurant, with one pair used as serving chopsticks. (Photo: GT)

China's Ministry of Commerce on Tuesday released a guideline, which requires restaurants to provide separate serving spoons and chopsticks, and promote separated dining, advocating a meal be finished within two hours in a bid to cultivate a better dining habit to help curb the spread of COVID-19.

According to the guideline, serving spoons and chopsticks provided by restaurants should be easily distinguishable and have a different color than a patron's. Even the toothpicks should be individually sealed.

Restaurants also are encouraged to provide individual portions for each diner.

On June 1, 2020 Beijing released regulations concerning dining that stated serving chopsticks and spoons, as well as individual servings should be adopted as means to prevent the spread of COVID-19. Shanghai also proposed similar rules on February 23, 2020.

Although the concept of individual portions was promoted heavily during the SARS outbreak in 2003, studies show that only 12.1 percent of diners "always" used serving chopsticks at the time, and this number decreased to 11.2 percent by 2006, according to a report from the People's Daily.

The use of serving chopsticks is not a traditional mannerism as Chinese people share multiple communal dishes during a meal. Some restaurants also fear that promoting separated dining would increase their costs.

The epidemic has made more people aware of the health risks of sharing meals.