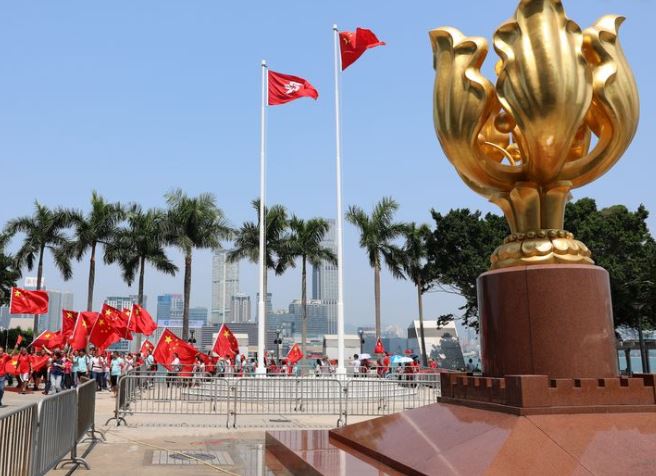 HONG KONG, Nov. 20 (Xinhua) -- Commissioner of the Ministry of Foreign Affairs of China in the Hong Kong Special Administrative Region (HKSAR) Xie Feng summoned the US consul-general here on Wednesday to lodge stern representations over and express firm opposition against the passage of a Hong Kong-related bill by the US Senate.

Xie Feng told Hanscom Smith, US consul-general to Hong Kong, that the passage of the so-called Hong Kong Human Rights and Democracy Act of 2019 is a gross interference in Hong Kong affairs, China's internal affairs, and a grave violation of international law and basic norms governing international relations.

Xie noted that what the act truly stands for is the "rogue democracy", "right to rioting" and "freedom to harm others" of a handful of rioters, at the expense of the majority of Hong Kong citizens' rights to subsistence, safety and work and freedom of expression, and their basic rights to make a living, go to school, or simply move around.

The provisions have provided a shelter for the rioters, put obstacles in the SAR government's efforts to stop violence and end the chaos, and intimidated the just people safeguarding law and order, he said.

"The aim is to fan the flames, and embolden the rioters to commit crime without scruples and endanger personal and property safety of the public. It comes as no surprise that the act has aroused indignation among the 7.5 million Hong Kong citizens."

The commissioner said that the act is against the 1.4 billion Chinese. The relevant American politicians have openly colluded with the opposition and violent radicals in Hong Kong, and attempted to play Hong Kong as a card to blackmail the Chinese government and the Chinese people and to contain China's development. Such plots will remain a pipe dream and only backfire.

The Chinese government is rock-firm in defending national sovereignty, security and development interests, in implementing the "one country, two systems" principle, and in opposing any external interference in Hong Kong affairs, he said.

Xie moved on to say that the act is against the international community. "Violent crime is a scourge to the world, while prosperity and stability are our shared aspirations. But some American politicians have acted against the trend of the times, distorted the truth on the pretext of protecting human rights, democracy and freedoms for their own political advantage, and endorsed the violence by the black-clad rioters."

It would not only harm Hong Kong but also cause the virus of violence to spill over, become complicated by populism, separatism and extremism, and ultimately bring disaster upon humanity. The politicians have therefore taken a significant misstep that will get the world nowhere, he added.

Commissioner Xie Feng said that the act is also against the US itself. The United States has a major stake in Hong Kong. Many people in the American business community and the Congress are against such political shows that do nobody good. American scholars and experts have made it clear that the act amounts to supporting the radical protesters in destroying Hong Kong, which would only hurt the United States and the entire world.

He went on to say that a growing number of members in the international community have also voiced opposition against the American politicians telling blatant lies and sowing more trouble, criticizing them for being "long-armed, blind to the facts, and black-hearted". The politicians are pursuing their political agenda at the expense of national and business interests, and will surely meet with stronger opposition.

"Hong Kong's prosperity and stability, and China's development achievements are not a gift from others, but the outcome of our hard work. China never bowed to external pressure even in difficult times, not to mention now, " he said.

"We will continue to resolutely support the chief executive in leading the SAR government in law-based governance, the Hong Kong police in strictly enforcing the law, and the Hong Kong judiciary in holding the violent offenders accountable in accordance with the law. We have sufficient means and power to maintain Hong Kong's prosperity and stability," he stressed.

The commissioner emphasized that any external coercion or pressure will not subdue the 1.4 billion Chinese people, including Hong Kong compatriots, and no force can ever hold back the rejuvenation of the Chinese nation. "We suggest the United States avoid any miscalculation in this respect."

Commissioner Xie Feng urged the US administration to see the destructive impacts of the act, not to support or sign it, and immediately stop meddling with Hong Kong affairs.

"The US side should stop advancing the relevant bills and correct its mistakes. Otherwise, China would definitely take resolute countermeasures, and the United States would have to bear any possible consequences," he said.