The Office of the Commissioner of the Chinese Foreign Ministry in the Hong Kong Special Administrative Region (HKSAR) has strongly disapproved and firmly opposed the so-called Investment Climate Statements issued by the US State Department, which smeared the national security law in Hong Kong. 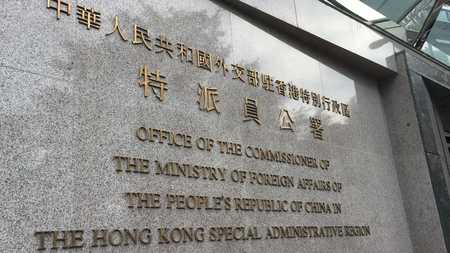 A spokesperson for the office said on Thursday that the US has grossly interfered in Hong Kong affairs and China's internal affairs at large, and violated international law and basic norms governing international relations.

The spokesperson said that the national security law in Hong Kong has put an end to "Hong Kong independence," "black violence" and "mutual destruction." Hong Kong's social order has returned to normal, the environment for governance has been improved, and social justice has been fully upheld.

Hong Kong's economy and finance continue to be strong, its market and investment environment are more stable, and its status as an international financial, trade and shipping center remains robust, the spokesperson said, adding that foreign investors, including US investors, feel more secure and confident in operating in Hong Kong.

The spokesperson pointed out that the HKSAR is governed by the rule of law, where laws shall be abided by and rigorously enforced, and no one shall be above the law. The national security law aims to punish a small handful of anti-China, destabilizing forces in Hong Kong who seriously endanger national security, and it protects the vast majority of Hong Kong residents who enjoy the lawful rights and freedoms.

A very small number of people have been arrested, prosecuted and tried by Hong Kong law enforcement and judicial authorities on suspicion of violating the national security law and the local laws of the HKSAR, with sufficient evidence, due procedure, and open and law-based verdict, the spokesperson said.

The US has been talking about safeguarding the rule of law in Hong Kong, but it pressured and coerced the independent performance of duties of law enforcement and judicial authorities in Hong Kong, tried to whitewash criminals and put political manipulation above the law. This kind of logic is ridiculous, the spokesperson said.

The spokesperson stressed that since Hong Kong's return to the motherland, the principles of "One Country, Two Systems," "Hong Kong people administering Hong Kong" and a high degree of autonomy have been effectively implemented, and Hong Kong has made widely recognized achievements.

"We believe that with the in-depth implementation of the national security law and the improvement of Hong Kong's electoral system, with the advancement of the 14th Five-Year Plan and Hong Kong's greater integration into the overall development of China, Hong Kong will be safer, freer, more democratic and more harmonious," the spokesperson said.

He urged the US side to manage its own affairs, bring in mind its own interests and image, and immediately stop interfering in Hong Kong affairs in any form.