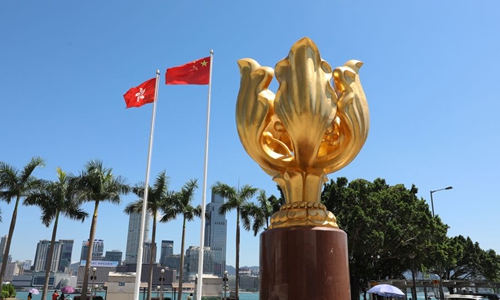 HONG KONG, May 8 (Xinhua) -- The Office of the Commissioner of the Chinese Foreign Ministry in the Hong Kong Special Administrative Region (HKSAR) on Friday condemned the collusion between local and foreign forces to destabilize Hong Kong.

According to media reports, an official of the European Parliament made unwarranted remarks on Hong Kong affairs and threatened to push for a European Union version of the Magnitsky Act to impose sanctions on Hong Kong in a video call with Hong Kong opposition figures.

This is another evidence of the collusion between foreign and local forces to mess up Hong Kong, a spokesperson of the commissioner's office said when commenting on the matter.

It has been 23 years since Hong Kong's return to the motherland, but some local lackeys of foreign forces, who have no national dignity and disregard Hong Kong's future and the interests of their compatriots, conspired with foreign forces to meddle in Hong Kong affairs and begged their "foreign masters" to sanction Hong Kong and oppose their own nation, the spokesperson said, calling such acts legally unacceptable and contemptible.

Some foreign forces defied international laws and the basic norms of international relations, ignored the fact that Hong Kong has returned to China, and attempted to regard Hong Kong as an independent and semi-independent political entity, the spokesperson said.

The spokesperson condemned those foreign forces for interfering in Hong Kong affairs, undermining the rule of law and judicial independence in Hong Kong, and jeopardizing China's sovereign security, stressing that they should be blamed for the prolonged violence, the damaged rule of law and the social unrest in Hong Kong.

Those who betrayed their own nation and messed up Hong Kong will be remembered as shameful figures in history forever and anyone who plotted to damage China's sovereign security is doomed to fail, the spokesperson said.