HONG KONG, Oct. 23 (Xinhua) -- The Office of the Commissioner of the Chinese Foreign Ministry in the Hong Kong Special Administrative Region (HKSAR) on Friday expressed strong disapproval of and firm opposition against the British government's breach of its commitment by willfully pushing ahead a new BN(O) visa policy, urging Britain to immediately correct its mistakes, end the hypocrisy and stop political maneuvering. 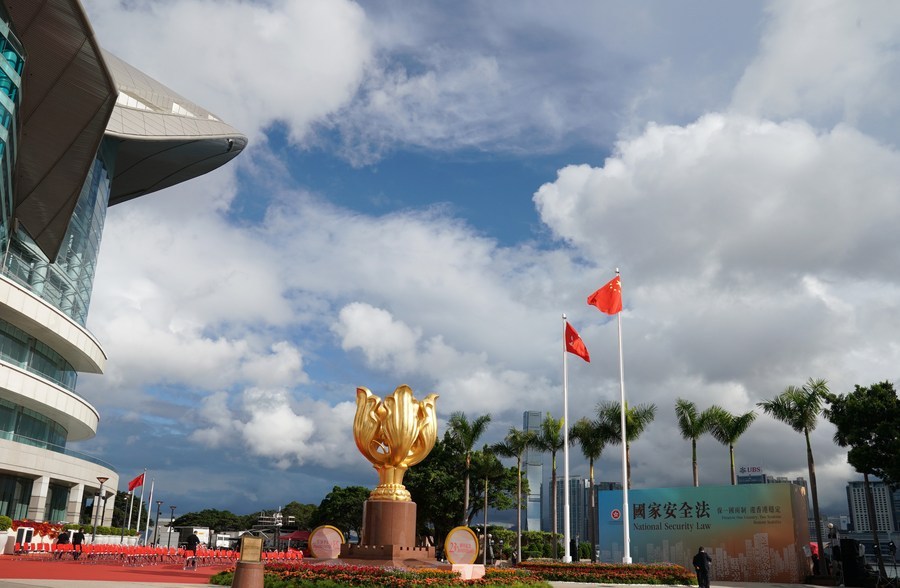 The office also expressed strong disapproval of and opposition against the groundless accusations by the British Consul-General to Hong Kong against the Law of the People's Republic of China on Safeguarding National Security in the HKSAR.

A spokesperson for the Commissioner's Office said that Britain declared in the memorandum exchanged with China before Hong Kong's return to the motherland that it will not confer the right of abode in Britain on Chinese nationals in Hong Kong holding BN(O) passports. Therefore, by offering such BN(O) holders a pathway to the right of abode and citizenship, Britain has openly breached its commitment, and grossly interfered with Hong Kong affairs and China's internal affairs as a whole in violation of international law and basic norms governing international relations.

The spokesperson pointed out that the British side has even distorted the Sino-British Joint Declaration in a bid to shift the blame onto China. The truth, though, is that the Joint Declaration is essentially about China's resumption of the exercise of sovereignty over Hong Kong and arrangements for the transitional period. In all the eight paragraphs and three annexes of the document, there is no single word or article that confers any responsibility on Britain over Hong Kong after Hong Kong's return to the motherland.

In brief, Britain has no sovereignty, jurisdiction or right of supervision over Hong Kong since its return. So there is no such "commitment to the people of Hong Kong" on the British side.

The spokesperson emphasized that it is the legitimate power of each sovereign state to safeguard national security through legislation, and no foreign country shall interfere. The national security law for the HKSAR has plugged the loophole in safeguarding national security in Hong Kong, and marked a major turning point for Hong Kong to regain its stability.

The rampant "Hong Kong independence" movement and black violence have been effectively curbed. The majority of Hong Kong residents have resumed normal lives, free from fear of violence or being targeted by rioters, with rights and freedoms better protected. But Britain has turned a blind eye to all these facts and tried to vilify the national security law, only to expose its intention to sow trouble in Hong Kong and its motherland at large.

The spokesperson pointed out that it was exactly Britain, which accused China of restricting the rights and freedoms of the people of Hong Kong, that did so during its rule in Hong Kong. Over the more than 150 years of its rule here, Britain granted no democracy or human rights whatsoever to Hong Kong residents, and each governor was appointed by the British government. When the British government ratified the International Covenant on Economic, Social and Cultural Rights in 1976, it made a reservation not to apply the provisions related to periodic elections to Hong Kong. The Public Order Ordinance and the Societies Ordinance during the British rule both imposed draconian restrictions on activities of assembly, procession and association.

It was not until Hong Kong was about to return to China that Britain amended the ordinances to loosen the restrictions out of ulterior motives. Not saying a single word about its record of restricting Hong Kong people's rights and freedoms, Britain has instead slung mud at China. But the fact is not to be denied, that it is not until Hong Kong's return to the motherland that the democracy, human rights and freedoms of our Hong Kong compatriots have been established and safeguarded, the spokesperson said.

The spokesperson emphasized that Hong Kong is part of China, and its affairs are China's internal affairs. Doomed is any attempt by Britain to meddle with Hong Kong affairs by manipulating the BN(O) issue. The British side was urged to immediately correct its mistakes, and stop political maneuvering that will only backfire.