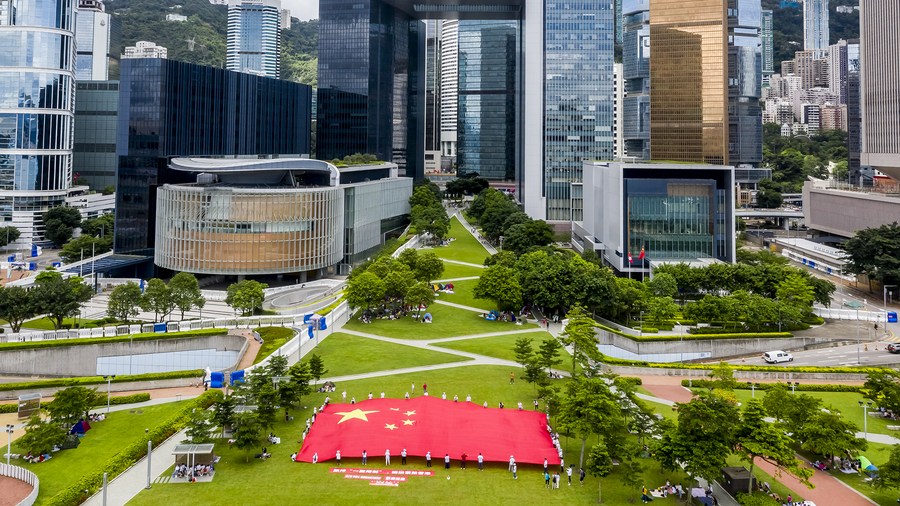 HONG KONG, May 28 (Xinhua) -- The Office of the Commissioner of the Chinese Foreign Ministry in the Hong Kong Special Administrative Region (HKSAR) on Friday expressed strong opposition to external forces' vilification and obstruction of Hong Kong's new electoral system.

A very few foreign politicians made interfering remarks maligning the passage of the Improving Electoral System (Consolidated Amendments) Bill 2021 by the Legislative Council (LegCo), a spokesperson of the office said in a statement.

These politicians have blatantly distorted the truth and openly meddled with judicial proceedings in the HKSAR in total disregard of international law and basic norms governing international relations, the spokesperson said.

The bill's passage upholds the constitutional order of the HKSAR as established by the Constitution and the HKSAR Basic Law, implements the principle of "Hong Kong people administering Hong Kong" with patriots as the mainstay, protects the rights of Hong Kong permanent residents to vote and to stand for election, and facilitates good governance in Hong Kong, the spokesperson said.

However, a few foreign politicians have persistently interfered with Hong Kong affairs and undermined "one country, two systems" and Hong Kong's prosperity and stability on the pretext of democracy, human rights and values, the spokesperson said.

They have turned a blind eye to the positive effects of the national security law for Hong Kong and the improvement of the electoral system and to their own notorious human rights records at home and the malaise of their systems, the spokesperson said.

The spokesperson urged those politicians to stop endorsing anti-China troublemakers destabilizing Hong Kong, stop meddling with Hong Kong affairs and China's internal affairs as a whole, and abandon any futile attempt to gang up on China by forming so-called "value-based alliances" or blocs.

No external interference will ever sway China's determination to safeguard national sovereignty, security and development interests, or ever weaken its commitment to fully and faithfully implementing "one country, two systems," the spokesperson said.