HONG KONG, June 10 (Xinhua) -- The Office of the Commissioner of the Ministry of Foreign Affairs of China in the Hong Kong Special Administrative Region (HKSAR) Thursday urged Britain to stop interfering in Hong Kong affairs and China's internal affairs. 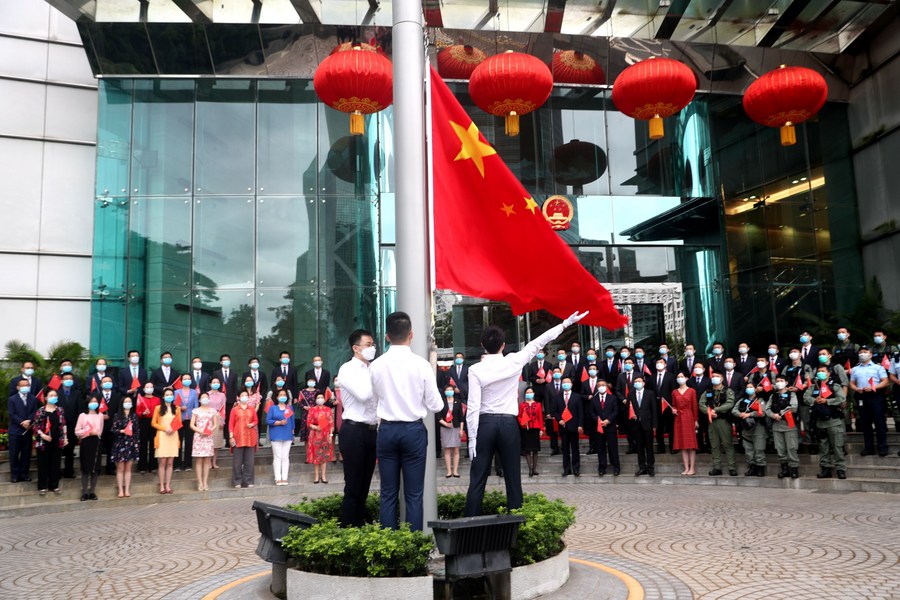 The Office of the Commissioner of the Chinese Foreign Ministry in the HKSAR holds a flag-raising ceremony to celebrate the 71st anniversary of the founding of the People's Republic of China in Hong Kong, China, Oct. 1, 2020. (Xinhua)

The commissioner's office made the statement in response to the so-called "six-monthly report on Hong Kong" released by the British government, which distorted the truth, blatantly meddled with Hong Kong affairs and China's internal affairs at large.

The office expressed strong disapproval of and firm opposition against the so-called report, which also trampled upon principles including that of non-interference in international law and basic norms governing international relations.

A spokesperson for the office said it is the Chinese government that has initiated, practiced and preserved "one country, two systems". The implementation of the Law of the People's Republic of China on Safeguarding National Security in the HKSAR has effectively restored order and stability to Hong Kong society and tranquility and freedoms to its people.

The improvement of Hong Kong's electoral system at the state level and the smooth completion of local legislation by the HKSAR this year have plugged loopholes in the legal system, protected political stability and safety of the HKSAR's body of power, and started a new chapter of good governance in Hong Kong, the spokesperson said.

Both are fundamental measures that stay true to the original aspirations of "one country, two systems" and safeguard the enduring success of the principle. Several million Hong Kong people signed petitions to show support, and such popular will is simply unstoppable, the spokesperson said.

The spokesperson pointed out that Britain has shown total disregard for the positive momentum in the Hong Kong situation and people's longing for peace and stability, and chosen instead to openly meddle with Hong Kong affairs on the pretext of human rights, democracy and the rule of law. Meanwhile, though, it has turned a blind eye to the dark past of its colonial rule in Hong Kong, when Hong Kong people were never guaranteed genuine rights and freedoms back then.

The spokesperson said that the legal grounds for the Chinese government's governance of the HKSAR since Hong Kong's return are the Constitution of the People's Republic of China and the HKSAR Basic Law, not the Sino-British Joint Declaration.

The spokesperson emphasized that Hong Kong is part of China, and its affairs are China's internal affairs. Any external force wishing the HKSAR and China at large ill is doomed to be disillusioned.