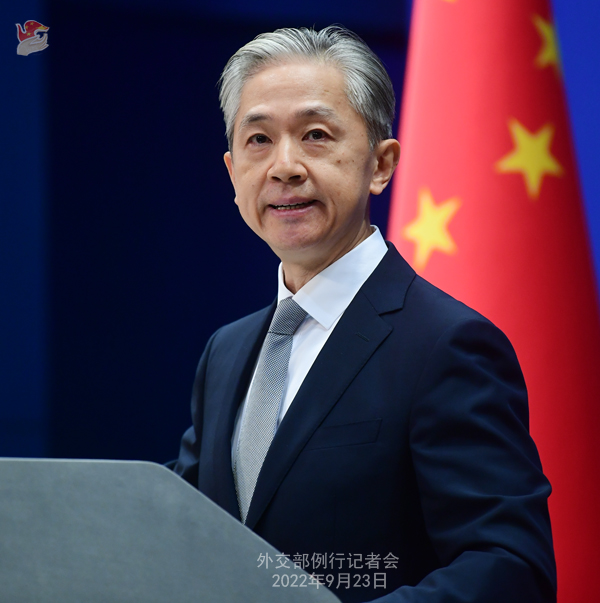 China hopes Germany and other members of the Group of Seven will be committed to the one-China principle by taking concrete actions to implement it, Foreign Ministry spokesman Wang Wenbin said on Friday.

Wang made the remark after the G7 foreign ministers and European Union foreign policy chief Josep Borrell expressed opposition to unilateral changes to the status quo across the Taiwan Straits after they met on the sidelines of the United Nations General Assembly in New York.

"There is no change in the basic positions of G7 members on Taiwan, including stated one-China policies," German Foreign Minister Annalena Baerbock said in a statement in her capacity as chair of the G7 foreign ministers' meeting on Thursday.

Speaking at a regular news briefing in Beijing, Wang said that both sides of the Taiwan Straits belong to one and the same China, and Taiwan is part of China's territory.

"China's national sovereignty and territorial integrity have never been divided and this is the status quo across the Taiwan Straits. Lying at the heart of the status quo is the one-China principle," the spokesman said.

Wang said it is not China but the ruling Democratic Progressive Party authorities in Taiwan and some external interference forces bolstering "Taiwan independence" that are trying to change the status quo.

Cross-Straits peace will be better secured when commitment to the one-China principle is being made in a clearer and more forceful way, as it underpins peace and stability across the Taiwan Straits, the spokesman said, urging actions from members of the G7 to implement the principle.

Also on Friday, Wang announced that Wan Gang, vice-chairman of the National Committee of the Chinese People's Political Consultative Conference, will attend, on behalf of the Chinese government, the funeral of former Japanese prime minister Shinzo Abe, who was assassinated in July.

It serves the fundamental interests of both countries and their people to maintain and develop friendly cooperation between the two close neighbors that are also important countries in the region, Wang said.

As a responsible major country, China's contributions to world peace, stability and prosperity are witnessed by all, he said, expressing the hope that the Japanese side will work with China to build a China-Japan relationship that meets the requirement of the times.