CHINA Community-centered services cater to the elderly living in Shanghai

Community-centered services cater to the elderly living in Shanghai

When her husband passed away early this year at the age of 92, Liu Yunshu, an 87-year-old woman living in Shanghai's Changning District, shut herself off. 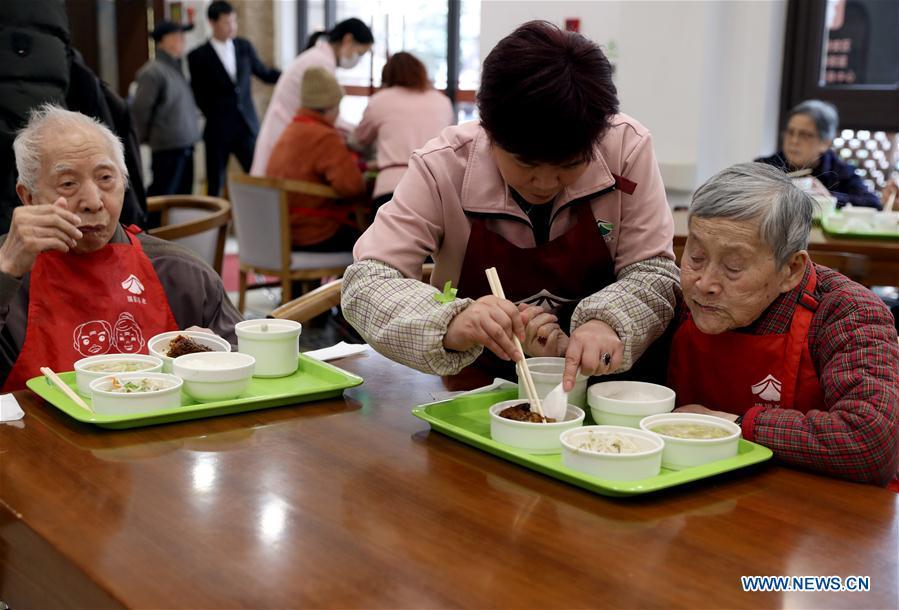 Nearly half a year has passed, but she refuses to go out, not even when the city, following an effective containment of the COVID-19 pandemic, lowered the emergency response level from two to three in May.

In June, Changning Jinmei Elderly Nursing Center, the city's first rehabilitation center that was established to treat elderly people's cognitive problems resumed operation. It was there that the old couple received treatment together, during which Liu's husband Yu Jinliang told the care workers that he owed a life debt to his wife and his family.

By participating in China's highly confidential missions in developing atomic and hydrogen bombs, as well as its first satellite, Liu's husband worked with numerous scientists in a landlocked desert in the country's northwestern region that is thousands of miles away from home. He stayed there for five to six years, unable to contact his family.

Trying to persuade Liu to pull herself together from the grief, staff from the rehabilitation center made an album of the couple in reminiscence of the days they had spent together at the training sessions.

"We present the album as memorabilia," said Fei Chao, director of the nursing center.

Each session provided by the center lasts between 40 minutes and one hour once a week. It focuses on training the elderly suffering from impaired cognition by applying Kunqu Opera, a traditional Chinese genre that originated from Kunshan, Shanghai's neighboring Jiangsu province.

According to Fei, Kunqu Opera provides a window of opportunity for those who need to improve their cognitive abilities while growing senile. The elements involved are conducive to stimulating cognitive nerve.

Shanghai is China's first city with an aging society. As of the end of 2019, the city has more than 5.18 million registered elderly aged 60 and above, accounting for 35.2% of the local population living with registered permanent residences.

Addressing the aging population, Shanghai has rolled out a slew of programs, including full-time or part-time nursing, assistance to disabilities and healthcare services and consultations. These services are within a 15-minute walk from every urban community.

"I don't feel like cooking today," said 79-year-old Cheng Wenhua, who lives in Changning District's Hongqiao community. "I will have lunch here, and it is very tasty."

However, the meal served to Cheng is not cooked by some veteran chef but rather a cooking machine. The two mobile canteens launched near Cheng's community can each produce 500 to 800 dishes a day through cold chain logistics and on-site cooking.

In addition, major districts in Shanghai have employed a portfolio of high-tech nursing services, such as mobile cloud terminal and data analysis, to ensure a comfortable and safe environment for elderly people.

Nevertheless, machines and people are of equal importance. Touched by the album from the rehabilitation center and frequent social worker visits, Liu is no longer a shut-in.

She restarts her training to counteract her cognitive problems just as she did with her husband.