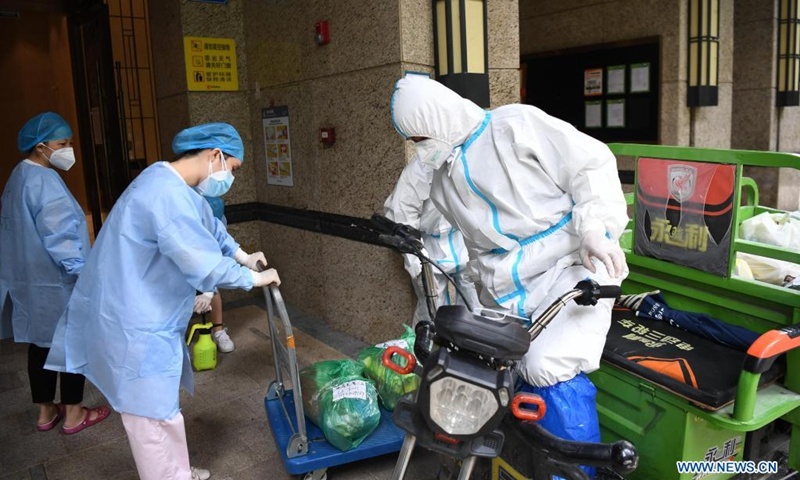 A staff member of a property management company (R) hands over the online shopping goods ordered by residents under home quarantine to volunteers at a residential area at Liwan District of Guangzhou, capital of south China's Guangdong Province, June 2, 2021. Guangzhou has tightened anti-epidemic measures in parts of the city to curb the recent COVID-19 resurgence, local authorities said Tuesday.(Photo: Xinhua)

The recent COVID-19 cases detected in South China's Guangdong Province are putting pressure on local manufacturing industry as shipments of raw materials are delayed, and logistics companies and ports are facing longer waiting times and obstacles to deliveries.

"Our productivity has dropped by 30 percent due to the resurgence of some COVID-19 cases, and tight electricity supply," Yin Xiandeng, a sales manager at a medical equipment company based in Guangzhou, told the Global Times on Tuesday.

"The transportation of raw materials is being delayed, the daily commute of employees is getting troublesome, and the nucleic acid testing of all staff is affecting the production capacity," Yin said.

Due to the need for testing, access to containers, airports and terminals is also limited, and that is adding one week to shipping times, Yin said.

At Yantian Port, which is responsible for more than one-third of Guangdong's foreign trade, operations have been slowed, with crowded docks and delayed shipping dates. Many shipments have been moved to neighboring ports, which are now facing backlogs as well, industry insiders told the Global Times.

"We have to change sea-bound shipments to air freight to get European and US orders delivered on time, which is an additional cost for the company," Yin added.

However, he noted that the impact is limited to only a few districts in Guangzhou, and companies in Shenzhen told the Global Times that they have not felt any impact on exports, although domestic orders have been affected.

"We stopped shipping goods to some high-risk places in Guangzhou," a manager from a Shenzhen-based home appliance company told the Global Times on Tuesday.

The prevention measures have slowed local logistics. As of Monday, railway passengers in Guangzhou and Foshan were required to show negative nucleic acid tests taken within 48 hours. Passengers from other cities in Guangdong need to show reports taken within 72 hours if they want to leave the province.

According to a furniture factory owner surnamed Li in Dongguan, truck drivers coming to his factory have to take a nucleic acid test within 48 hours, which has led to delays of about two days for raw materials shipments.

"I'm worried about a full halt of production," Li said, adding that since orders have been mounting over the past year, any further interruption would be a huge loss.