Companies in 'operations' to support medical workers amid virus outbreak 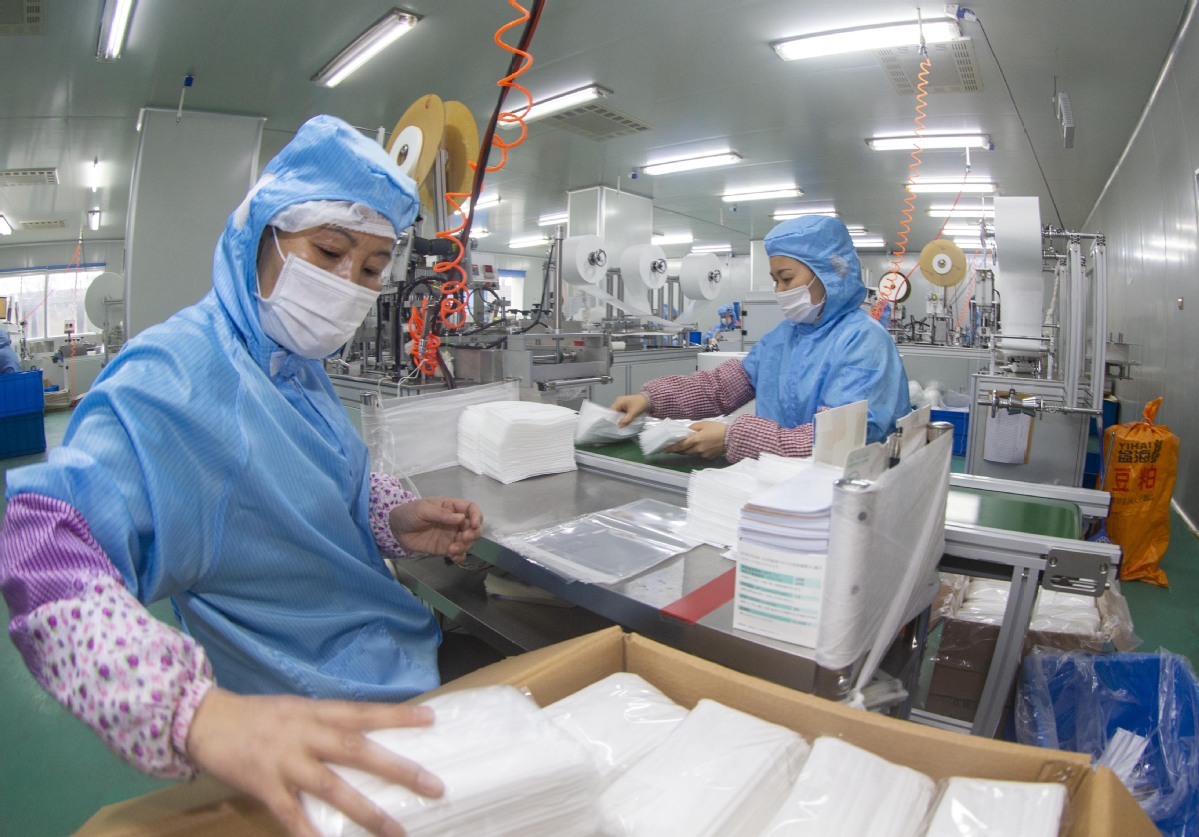 Employees at a factory in Taizhou, Jiangsu province, work around the clock to produce masks to replenish supplies in the fight against the novel coronavirus. (Photo: Tang Dehong/China Daily)

CHANGSHA/SHANGHAI -- In the assembly line of a bustling factory, Liu Jing quickly cuts pieces of blue and white items and sews them into protective suits.

Liu is a worker at the Hunan Yongfei Special Protective Product Co Ltd in Central China's Hunan province. The company previously churned out regular protective clothing for laborers in China, but it currently focuses on manufacturing protective suits for medical workers.

"We have transformed our business, and we are trying our best to do what we can to help medical workers amid the virus outbreak," Liu said.

China is feeling the pinch of the coronavirus outbreak, with health authorities saying Thursday they received reports of 3,694 new confirmed cases of infection and 73 deaths on Wednesday from 31 provincial-level regions and the Xinjiang Production and Construction Corps. The overall confirmed cases reached 28,018 on the Chinese mainland by the end of Wednesday.

Under strict standards, many companies are transforming their businesses to provide medical supplies for workers fighting on the front lines.

In response to government calls, the company began to mull ways to make the suits in late January. After formulating a plan for equipment, raw materials, personnel and craftsmanship, company technicians created an assembly line in three days.

The company can produce 5,000 medical suits every day, and its first batch of products went to the frontlines on Wednesday.

"We hope to reach a daily capacity of 8,000 by finding more resources to help our medical workers," said deputy general manager Cai Jianhua, adding that the group is also exploring ways to make masks.

Hunan Yongfei Special Protective Product Co Ltd received an official registration certificate on Wednesday, and workers are working around the clock to keep the factory rolling.

After the outbreak of the novel coronavirus, medical supplies were in shortage, but Hunan Province had no companies specializing in making protective medical suits.

On Jan 27, provincial authorities began to scour the province for potential manufacturers. They eventually decided to count on Hunan Yongfei, which traditionally produced overalls against arc flashes and wielding clothes.

Officials formed a work team and went into the company to help it focus on the transformation.

"Protective medical suits are very professional clothing and have very high requirements for the equipment and the environment," said Liu Zhiquan, head of the work team. "If we depended on the company itself for factory cleaning, sterilization and disinfection, it would take at least three months."

With the officials' help, specialists assisted with sterilization, and drug inspection staff dealt with sample examination in advance.

On the night of Jan 31, the company submitted an urgent registration, and the provincial medical product administration streamlined the procedures.

"While the administrative procedures went on, we tried our best to prepare equipment, personnel and raw materials," said Li Wenhui, who is in charge of the company. "It was a race against time."

"The government approved our certificates quickly and helped us find raw materials, and we purchased equipment, vacated a clean factory and trained related staff. All the procedures were done above the national standards," Li said. "Although it was an emergency, safety and quality cannot be compromised."

"It is a significant mission," she said. "But we will get through this together."

Liu Jing has worked in the factory for days. She received proper training and is familiar with the production standard.

"Everybody is in good form, and we know we are doing something bigger than just producing protective medical suits," she said.

The company can make 3,000 such suits on a daily basis. It has found new resources to add two more production lines. Once transformed, the company could add 7,000 more protective suits to its daily capacity.

"The first batch of protective suits will reach medical workers on Feb 10," said Liu Zhiquan, the head of the government work team. "The whole production will reach 48,000 in February."