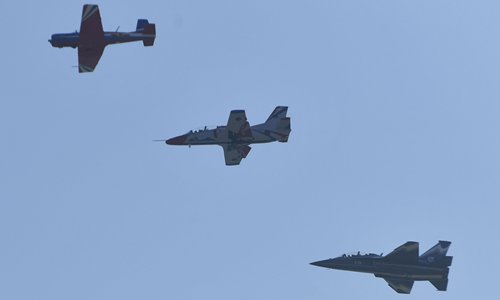 A formation consisting of a CJ-6 basic trainer aircraft, a K-8 intermediate trainer jet, and an L-15 advanced training and light combat aircraft conducted a flight performance on Saturday at Nanchang Flight Convention in East China's Jiangxi Province, according to a statement Hongdu Aviation Industry Group under the state-owned Aviation Industry Corporation of China released on its WeChat account.

This is the first time the three types of trainers, all developed by the Hongdu company, have flown together in public, the company said, noting that the aircraft has built a three-level pilot development mechanism for the Chinese Air Force and Navy's aviation troops, and will contribute to the Chinese military as the military gains more combat capabilities.

Pilot cadets can start learning flying from the CJ-6, then the more sophisticated K-8 and graduate when mastering the L-15, an anonymous military expert told the Global Times on Sunday.

The three trainers are designed so cadets could gradually understand how an aircraft works, how to control and make maneuvers and then apply the techniques in combat, the expert said.

The CJ-6, developed more than 60 years ago and still in use, uses an old-fashioned piston engine and has relatively few advanced technologies, and is very sturdy and reliable; the K-8 made its maiden flight in 1990, and with a turbofan engine it is suitable for many basic and some advanced training subjects; the L-15 is a newly developed training and light combat aircraft that uses many advanced technologies including an advanced aerodynamic design, fly-by-wire control system and open avionics structure, and is currently being commissioned into the military, according to reports.

A full set of trainers can help China constantly develop pilots as China builds more fourth and fifth-generation fighter jets, the anonymous expert said, noting that the new L-15 could play important roles in developing pilots for the J-20, China's most advanced fighter jet, and other advanced fighter jets, as it is equipped with many advanced technologies that other trainers do not.

As a result, the three trainers have become popular in the international market.

Hundreds of CJ-6s were sold to foreign customers, and more than 300 K-8s saw exports to countries including Pakistan, Egypt, Zambia, and Myanmar, according to the statement.

The new L-15 is also available for export, with the first foreign customer being Zambia, US-based Aviation International News reported.