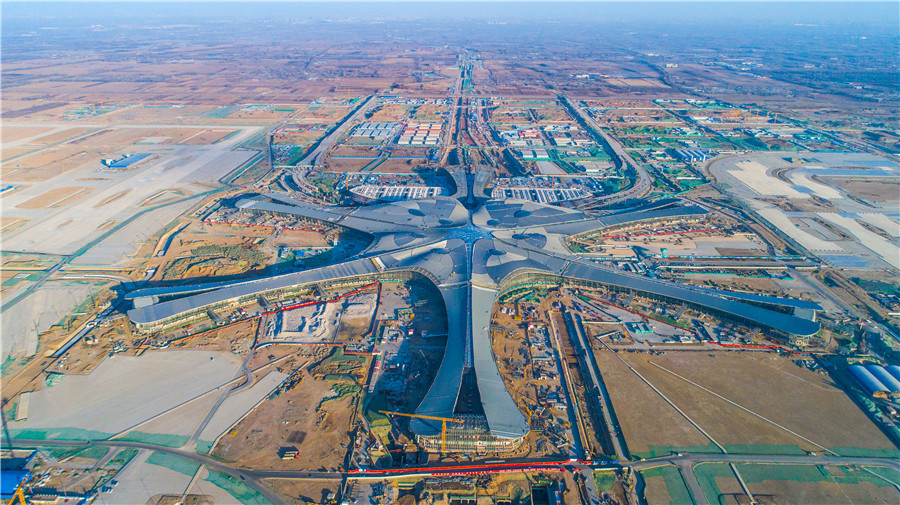 An aerial photo shows the construction site of Beijing's new airport in southern Daxing district in Beijing. The new international airport is taking shape and already has a roof in March. [Photo by Yang Zhiyong/chinadaily.com.cn]

The acceptance check for Beijing's new airport and auxiliary projects has been set for June 30, and three months later, the airport will be put into operation on Sept 30, 2019, according to a comprehensive plan issued Friday.

The comprehensive plan issued at a meeting covers the leftover construction work of the airport, the acceptance check work, transfer plan, preparatory work for formal operations, reception plan and other relevant special plans.

Feng Zhenglin, head of the Civil Aviation Administration of China, said at the meeting Friday that the plan has set some important time frames for the new airport project to be put into operation on schedule.

When the new airport is in operation, the core work area, life service area, freight area and supporting facilities in the first phase should be in use for China Eastern Airlines and China Southern Airlines.

The Beijing-Xiongan intercity high-speed railway should be operational. Meanwhile, the new subway line linking downtown Beijing and the airport, the new airport expressway and north line expressway should all be in use.

Authorities have urged related units to push ahead with construction work and preparatory work for operations at the same time. Some 92 percent of the flight area and 42 percent of road projects have already been finished.

The terminal has been completed, and interior decoration and equipment installation are underway. The west air control tower will be finished in June, and construction of the east tower is pushing forward.

Related units are urged to push ahead with work on personnel training, management mode research, organizational structure research, aviation business research and the compilation of an airport handbook.