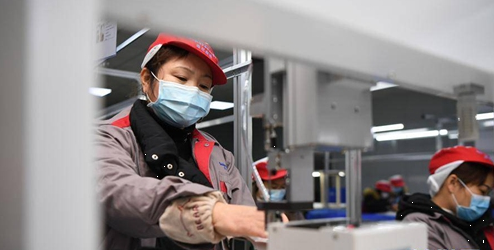 China has stepped up checks for international travelers and imposed penalties for those who lie about their health conditions to sneak across the Chinese border, as the country is on high alert to ward off threats of new infections from outside after easing the spread of the virus at home via a hard fight.
Given the fact that there have been 37 imported cases in Beijing and 123 nationwide, as well as practical problems such as lax home-isolation enforcement and concealing of health conditions, China's five top authorities announced on Monday that obstructing border health checkups, including concealing one's health status by providing wrong information when filling in a health form, and forging health and checkup forms and certificates, will be punished and lead to conviction.
Surnamed Liu, a female tourist who flew from Paris to Beijing on Sunday told the Global Times on Monday that after landing in Beijing, she was taken to a temporary transit spot at the new China Exhibition Center in suburban Shunyi district.
She said the center outlined different Beijing districts for corresponding international travelers to register their information.
After registering and getting a checkup, Liu was sent to a designated hotel for isolation. The rate is 432 yuan ($61.6) per day. She orders take-away online.
Liu said the room is good with air conditioning and a semi-closed balcony. She was asked to monitor her temperature three times a day and write it down. She also receives a phone call asking her health condition in the morning.
Liu's unusual entry came after the Beijing municipal government stipulated that from Monday, all arrivals in Beijing from overseas will be sent to designated places to undergo a 14-day mandatory quarantine, whether they have coronavirus symptoms or not.
After finishing the strict procedure at the exhibition center, passengers whose destinations are outside Beijing will be sent directly to their designated cities via plane or train under the full escort of specially tasked local government staff who are now based in Beijing, a staff member who was dispatched by the government of a city in Northeast China's Liaoning Province told the Global Times on Monday.
"The main aim is to avoid them taking any kind of public transport during their stay in Beijing from getting off the plane to heading back home," he said.
Passengers whose destination is Beijing will be directly sent to local designated hotels for quarantine.
Wang Jun, an official from China's General Administration of Customs, warned at a press briefing that tourists must honestly report their health conditions to the customs, and cooperate with testing procedures. Those who take the chance to escape or evade customs checkups will be spurned by the public, and also might face imprisonment.
As of press time, at least 16 Chinese people who returned from overseas while concealing the fact they were carrying the virus were investigated, including the latest case involving a 37-year-old woman who recently flew from Los Angeles to Beijing, for breaching rules on the prevention and treatment of infectious diseases by lying about her own and her family's health status.
Analysts believe that the policies being made along with changes in the situation and broad public opinion are bricks for constructing the final 'Great Wall' that will ensure the safety of the Chinese people. According to reports, at least 27 out of over 30 imported cases had symptoms before they entered China.
The governments of Beijing and many other cities announced recently that those who are not covered by China's national medical insurance will not enjoy free testing and treatment if confirmed to be infected when entering China. In addition, free treatment will be waived if Chinese people conceal their travel history and other health-related information.
"If they can get a flight ticket at this time, they can no doubt afford the treatment fees," commented a netizen in regard to a woman who concealed her infection and flew back from Los Angeles for treatment, noting the importance of law enforcement against those whose "selfish and irresponsible acts" might destroy the country's previous success.
Analysts believe that more measures should be promptly taken in addition to the prevention of imported cases, considering the dicey situation and panic of overseas Chinese due to many countries being unable to test and treat huge numbers of people like China was able to.
As of Monday, the total number of coronavirus cases overseas reached 86,430, which was more than the total number in China.
Zhi Zhenfeng, a legal expert at the Chinese Academy of Social Sciences in Beijing, called for more severe punishment for concealing the truth, such as huge fines according to an individual's salary. "Five times the annual income, maybe," he said.
Some also suggested including those who lied about their health condition to get into China on the blacklist in the nation's social credit system.
Zhi noted that some countries are actually encouraging overseas Chinese to go back to lighten their loads and pass the buck, which is highly immoral as the risk of infection during the journey is greater than staying at home when people are healthy. As a result, Zhi is calling for more cross-country communication and cooperation.
Zhi said it is necessary to build makeshift hospitals and designated quarantine spaces in advance, just in case more overseas Chinese return.