The Oculus of the World Trade Center, a new landmark in New York City, presented a dynamic symphony concert on Friday night in its atrium to celebrate the Chinese New Year. Photo taken on Feb. 8, 2019 shows a symphony concert for Chinese New Year at the Oculus of the World Trade Center in New York City, the United States. (Photos: Xinhua)

During the free one-hour concert, a number of famous Chinese music pieces such as "Jasmine Flower," "Ode to the Yangtze River," and popular western songs including Frank Sinatra's "New York, New York," were performed by the Asian Cultural Symphony, a local ensemble of nearly 100 artists of various ethnic groups and backgrounds.

The orchestra, which sat in the middle of the Oculus, was repeatedly greeted with warm applause from hundreds of commuters, tourists and shoppers.

The event was organized by the Port Authority of New York and New Jersey and the Asian Cultural Center (U.S.A.), an organization which was established in New York City in 1998 and has branches in Boston, Chicago and Washington D.C. 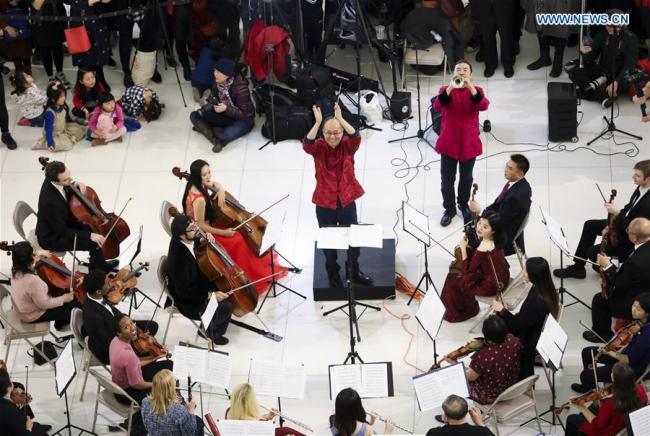 Musicians perform during a symphony concert for Chinese New Year at the Oculus of the World Trade Center in New York City, the United States, Feb. 8, 2019.

A man who identified himself as Wang was traveling with his family from China said he was surprised to hear a few familiar melodies in the U.S. metropolis.

"I'm amazed that the Chinese New Year is also celebrated here in New York at such a famous venue. The festivity here feels almost like the same back in China," he said.

Completed in 2016 beside the 9/11 terrorist attacks memorial site, the "Oculus" functions as a train station, plaza and shopping mall at the current World Trade Center area and is famous for its unique architecture. It serves 250,000 daily commuters and receives millions of annual visitors from around the world, covering an area of some 74,322 square meters.