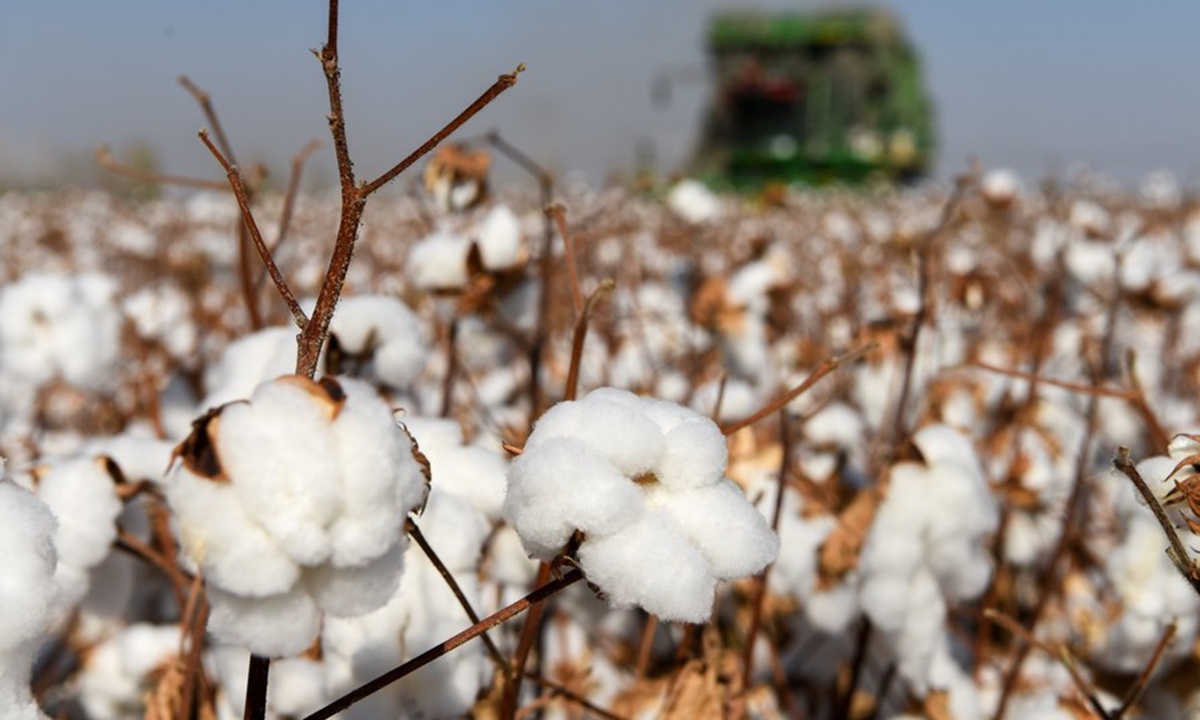 Using his old tricks of cherry-picking sentences from Chinese news outlets, misinterpreting China's poverty alleviation policies and jumping to set conclusions, the infamous anti-China "scholar" Adrian Zenz manipulated a new report to accuse China's Xinjiang Uygur Autonomous Region of using "forced labor" in cotton picking — the very front end of the textile industry in the region -- and analysts said that Zenz's purpose is to make new "evidence" for some Western countries, especially the US, to attack Chinese companies on the industry chain and mar China's image.

Zenz, a far-right Christian who is fabricating unfounded reports to slander China's policies in Xinjiang, published his new work on Tuesday, claiming that new evidence from Chinese government documents and media reports shows that "hundreds of thousands of ethnic minority labors in Xinjiang are being forced to pick cotton by hand."

Citing Zenz's latest report, the BBC carried a report on the same day, and it highlighted sentences extracted from reports of Chinese news outlets to suggest that Xinjiang is using "forced labor."

Zenz claimed in his report that 70 percent of the cotton plantations in Xinjiang in 2019 were harvested by human labor and he found "evidence" of coercion in the recruitment, transfer and management of workers in cotton harvesting through Chinese news reports.

However, data released by the agriculture department of Xinjiang in 2020 showed that the total cotton plantation area in Xinjiang reached 24.19 million mu and around 16.90 million mu were harvested by machines, accounting for 69.83 percent of the plantation area. Also, 95 percent of the cotton in northern Xinjiang was harvested by machines and the mechanization in southern Xinjiang has increased steadily.

Ou Xingjiang, head of the machinery administration bureau in Xinjiang, was cited by farmer.com as saying that the mechanization of cotton harvesting started in 2000 and widely spread across Xinjiang in 2010. The need for machines skyrocketed since 2015.

Moreover, by reading through the "evidence" offered in Zenz's reports - Chinese media reports - the Global Times also found they told different stories than those presented by Zenz.

For example, Zenz said in the report that "Notably, cotton pickers in Xinjiang have long been difficult to find in sufficient number."

The hyperlink added to the sentence leads to a news report on January 18, 2018 from the Xinjiang Daily. The original story said that Gao Jiaru, a cotton farmer from Xayar county in southern Xinjiang's Aksu Prefecture, used to find that it was hard to get workers to pick cotton, and later he used machines to plant, manage and harvest 400 mu of cotton. The report also noted that Aksu began to push the use of machinery in cotton planting and harvesting since 2011, and this helped farmers to increase their income by 70 million yuan in 2017.

Cotton picking used to be a popular choice for migrant workers from other provinces. Sichuan Province used to send workers to pick cotton in Xinjiang by a chartered train. Free meals and housing were offered and the daily income could be 300 yuan, Tian Yun, vice director of the Beijing Economic Operation Association, told the Global Times.

Due to the influence of COVID-19, less migrant workers from other provinces went to Xinjiang for the cotton-picking work this year. And machines and local workers filled the blank, the Global Times have learned from cotton farmers across Xinjiang, including those from the Xinjiang Production and Construction Corps (XPCC).

"We used machines to harvest most of the cotton and human labor was only used for a small part of the plantation, where machines can't get through," a cotton farmer surnamed Wang from southern Xinjiang, told the Global Times.

Cotton farmers signed contracts with workers and paid them 2.5 yuan per kilogram, Wang said, noting that workers could earn 200 to 350 yuan a day.

The minimum monthly salary in Aksu is about 1,460 yuan.

The report also said that Aksu Prefecture had plantations growing 7.46 million mu of cotton in 2020, of which 5.33 million mu had been harvested by machines.

Machines imported from the US, including John Deere, have been widely used in Xinjiang.

The South China Morning Post released a report in August, saying that sales of US-manufactured cotton-harvesting machinery to China have increased by 4,000 percent in April compared with the same month last year.

After the US banned Xinjiang companies from doing business with US companies, many companies and farming cooperatives have been seeking domestic machines to replace the US ones, an insider told the Global Times.

"It is ridiculous to see those who have little understanding of China's Xinjiang making false reports. Are there any cotton farmers or cotton pickers from Xinjiang being interviewed by the so-called scholar or the Western media? Have they asked these people whether they were 'forced' to earn money?" Cao Wei, executive director of the national security research center of the School of Politics and International Relations at Lanzhou University, told the Global Times.

Aside from Zenz's Tuesday report, previous accusations against China include claims that the Xinjiang region used forced labor in garment, shoe and textile factories, as well as plants for electronic products.

Chinese experts also exposed the old tricks used by anti-China "scholars," especially Zenz, and some Western media when reporting on China's Xinjiang. Any buildings with fences or other security measures they saw in Xinjiang or satellite images were "camps," any workers of ethnic groups were "forced laborers," patriotic education would be interpreted as "genocide of ethnic groups," anyone from Xinjiang would be shown as "victims" in Western media, and people like Zenz who liked to make and spread lies were "experts on Xinjiang."

They noted that such news and reports on Xinjiang are easy to manipulate to fool the international community.

The Xinjiang regional government has reiterated that there is no "forced labor" in Xinjiang and people of all ethnic groups choose employment based on their own willingness.

Cao said that repeated slandering of China's Xinjiang would mar China's image in the international community, and malicious reports by Zenz and other anti-China individuals, media outlets and organizations would also be used as weapons for some Western countries to attack China under the guise of "human rights."

He noted that the slander of Xinjiang's efforts to transfer surplus labor in Xinjiang also aims to put hurdles in the way of Xinjiang's economic development. The US and some Western countries will not give up using Xinjiang-related topics to contain China.