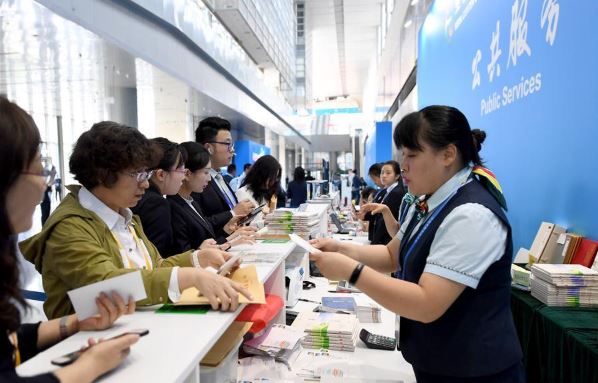 Reporters buy commemorative envelopes at the media center of the Conference on Dialogue of Asian Civilizations in the China National Convention Center in Beijing, capital of China, May 14, 2019. (Photo: Xinhua)

BEIJING, May 24 (Xinhua) -- The Conference on Dialogue of Asian Civilizations (CDAC), opening in Beijing on May 15, has produced 26 outcomes, including the 2019 Beijing Consensus of CDAC, the event's organizer said Friday.

Participants of the CDAC agreed in the 2019 Beijing Consensus that diverse civilizations should respect each other in a spirit of inclusiveness and mutual learning and conduct more extensive and in-depth dialogue, exchanges and cooperation, according to a press release from the CDAC organizer.

During the event, China and Asian countries have agreed on cooperation projects in various areas such as cultural heritage conservation, translation of classic literature, joint film and TV production, the statement said.

The participants also signed a number of multilateral and bilateral cooperation documents in areas such as support for young scholars, cooperation among think tanks and joint development of culinary cultures.

Several reports were published during the event, including reports on Asia's role in global governance, awareness of Asian civilizations and tourism cooperation.