CHINA Confrontation between China, US would be a disaster for both sides and the world: FM spokesperson

Confrontation between China, US would be a disaster for both sides and the world: FM spokesperson 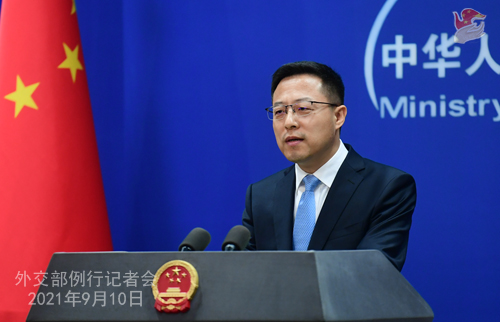 Zhao Lijian made the remarks at a daily news briefing when asked to comment on the telephone call between President Xi Jinping and US President Biden on Friday morning.

Zhao said that China and the United States are the biggest developing country and biggest developed country. Whether they can handle their relationship well affects the future of the world. It is a question of the century to which the two countries must provide a good answer.

"Getting the relationship right is not an option, but something we must do and must do well," Zhao noted.

He pointed out that with the international community facing many common challenges, China and the United States need to show broad vision and shoulder great responsibility.

The two countries should look ahead and press forward, demonstrate strategic courage and political resolve, and bring China-US relations back to the right track of stable development as soon as possible for the good of the people in both countries and around the world, he said.

"Both presidents agreed that in-depth communication between them on China-US relations and major international issues is very important for steering the bilateral ties in the right direction,"he said.

They agreed to maintain frequent contact by multiple means and instruct officials at the working level to intensify the work, conduct extensive dialogue and create conditions for the further development of China-US relations, the spokesperson added.