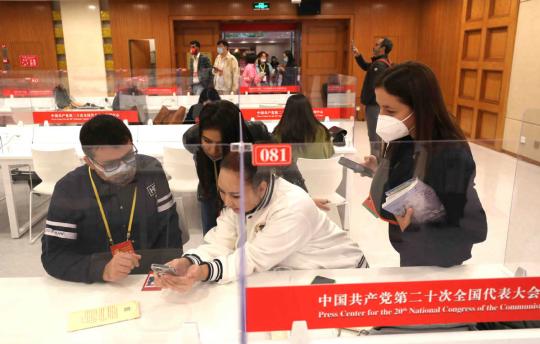 Journalists from different countries and regions work on Wednesday in Beijing at the media center for the 20th National Congress of the Communist Party of China. (Photo: China Daily)

The media center for the upcoming 20th National Congress of the Communist Party of China officially opened on Wednesday.

The center, with its main function areas located in the Beijing Media Center Hotel and the Hotel Nikko New Century Beijing, will provide services for journalists from home and abroad including through on-site interviews, online video interviews and written interviews.

The center will organize news conferences and arrange coverage of the Congress for reporters. Interviews with delegates to the Congress and tours of Beijing will also be organized.

An online video system was set up to allow journalists to conduct interviews in the center via video link.

The center organized two tours for journalists on Wednesday — a visit to the exhibition Forging Ahead in the New Era at the Beijing Exhibition Hall in the morning and key architecture along the Central Axis of Beijing in the afternoon.

Around 300 journalists from over 210 media outlets in more than 80 countries and regions visited the exhibition to learn of the progress China has made since the 18th CPC National Congress in 2012.

Bryan Otieno, a journalist from the Kenyan newspaper The Star, said: "The things we've read about China, we are now seeing them here in real life."

Etambuyu Katota, a reporter from the Zambia National Broadcasting Corporation, said she was impressed by and interested in the space technology displayed at the exhibition.

Katota said it will be her first time to cover a CPC National Congress and she looks forward to hearing at the event about cooperation between Africa and China.

"I would also like to see the progress that China has made so far, and we're coming to learn from you people as well," she said.

Yonemura Koichi, the China general bureau chief of the Mainichi Newspapers from Japan, said he expected to learn from the upcoming 20th CPC National Congress about what will be emphasized as the biggest achievement over the past decade in China and what will happen in the next five or 10 years.