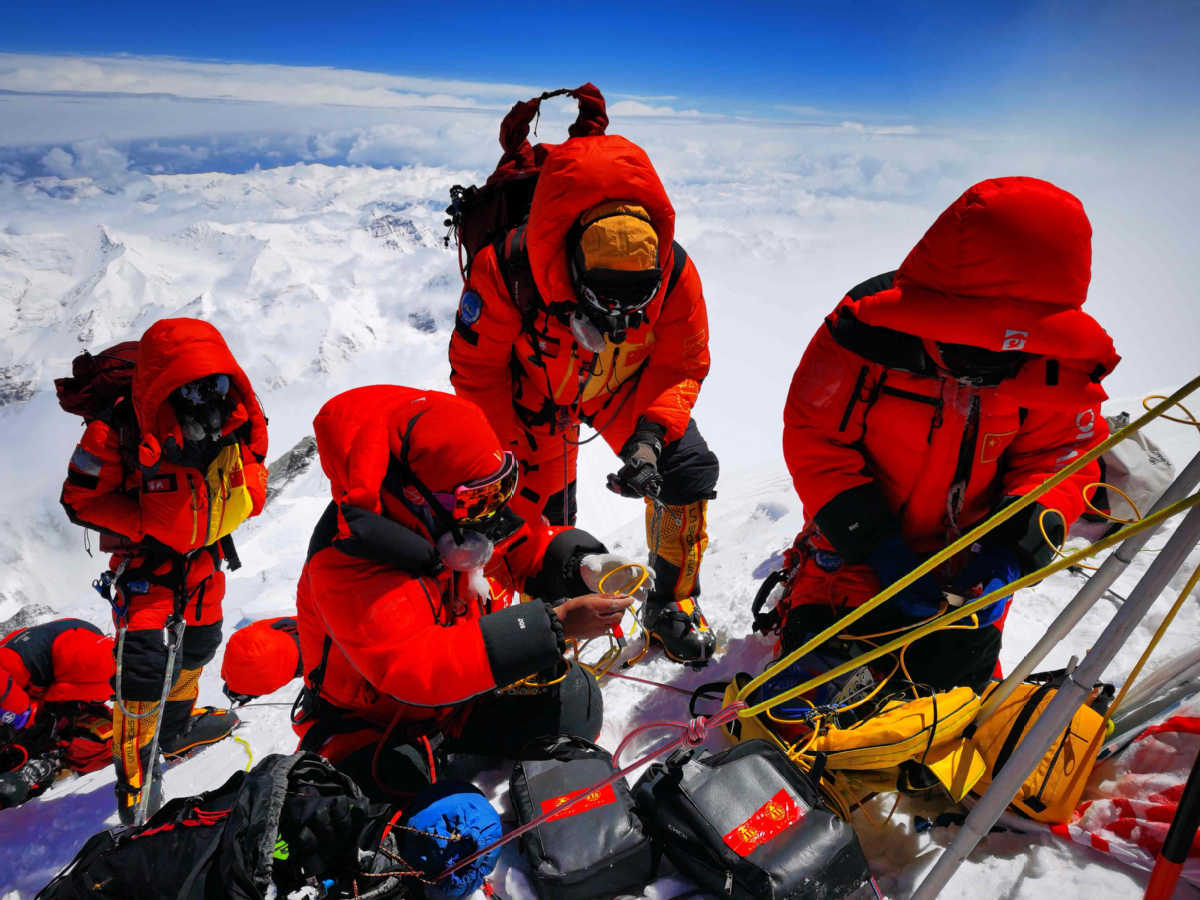 The Chinese surveying team works on the summit of Qomolangma on May 27. (Photo: Xinhua)

Meanwhile, work will start on the China-Nepal Friendship Industrial Park in Jhapa, eastern Nepal, early next year. The park is the first of its kind launched with Chinese investment.

These two projects form part of the Trans-Himalayan Multi-Dimensional Connectivity Network, which China and Nepal vowed to bring about after signing a memorandum of understanding on Belt and Road Initiative cooperation in 2017.

Nepal joined the China-proposed initiative in 2017. Last year, President Xi Jinping paid a state visit to Nepal, the first to the Himalayan country by a Chinese president for 23 years.

During his visit, China and Nepal elevated their relationship to a "strategic partnership". Nepalese media cited former prime minister Baburam Bhattarai as saying the move opened up "new vistas" for bilateral cooperation.

The Trans-Himalayan Railway project, part of the Belt and Road Initiative, could be an economic and geopolitical game-changer for Nepal and help the landlocked country access the global value chain, Bhattarai said.

The network involves infrastructure projects such as building railways and communication networks, along with cultural exchanges, he said, adding that such projects would better people's livelihoods in Nepal and contribute to the prosperity of both countries.

Referring to the railway project, he said: "Once the railway opens, it will be the first line connecting China and Nepal and will facilitate people-to-people exchanges at all levels."

In the first nine months of last year, bilateral trade between China and Nepal reached nearly $1.1 billion, a year-on-year rise of 38.4 percent, according to official data.

When Nepal badly needed medical supplies to curb the spread of COVID-19 earlier this year, China was quick to help.

Back in 1998, the Chinese and Nepalese governments signed a protocol to send Chinese medical teams to Nepal.

In following years, authorities in Hebei province sent 228 medical professionals to Nepal, with the 13th such team, comprising 17 medical workers, arriving in the country in September.

In April 2015, after a devastating earthquake struck Nepal, the Chinese government formed the China Medical Team and sent it to help at the disaster zone.

On Dec 9, a day after the two countries announced the new height for Qomolangma, Mahendra Bahadur Pandey, Nepal's ambassador to China, hailed their solid relations. He made the remarks in an interview with Xi'an Daily during his first visit to the city.

The envoy said Xi'an is beautiful, rich in educational resources and has the highest number of Nepalese students among all Chinese cities.

The Belt and Road Initiative will benefit many countries in the region, including Nepal, he added.

Pandey said Asia is the world's largest and most populous continent and its development is crucial globally.

The BRI has produced a series of exchanges among different cultures and will connect the world as a whole. It has also boosted cooperation among countries in education, science, economic and cultural development, he said.