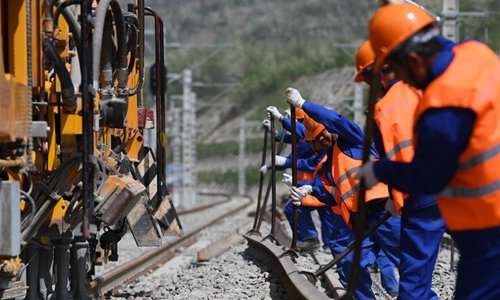 With a total length of 418 km, the section was started in March 2018, linking the city of Ordos in north China's Inner Mongolia Autonomous Region with Yichuan County, northwest China's Shaanxi Province.

Workers overcame a complicated construction environment to lay the tracks across the Maowusu desert and the Wuding River, an anabranch of the Yellow River.

The 1,837-km Menghua railway, which ends in the city of Ji'an, east China's Jiangxi Province, will be the longest heavy-loaded railway in the country when completed in October, with an annual delivery capacity of 200 million tonnes.