Consumers in China’s counties and towns have become a new driver for domestic consumption growth thanks to the development of county economies. 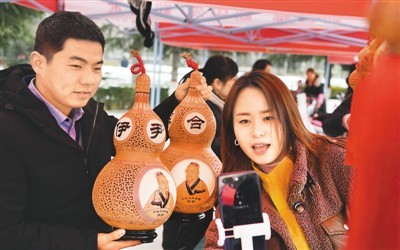 During this year’s National Day holiday, 53 percent of the commercial electric appliances sold on Chinese e-commerce giant Alibaba’s platforms were purchased by customers from counties and 48 percent were sold to towns, according to a recent report released by Alibaba. Meanwhile, 60 percent of tourists were from third- and lower-tier cities, the report said.

Young people in counties and towns are active consumers of home appliances, entry-level luxuries, cosmetics, and culture and entertainment products.

Sun Bin, a woman who has worked for three years with some savings in Peixian county, east China’s Jiangsu province, has shocking spending habits.

“I spend about 2,000 yuan to buy products each month, most of them are cosmetics,” said Sun, explaining that she lives a comfortable life in the county with housing prices and living costs lower than that in first-tier cities.

According to data from Chinese e-commerce platform Suning’s retail arm, counties are undergoing an acceleration in consumption upgrade. On Oct. 1, Suning’s retail arm embraced a good start during the holiday, as the sales of home appliances and non-electrical products increased by over 1.5 times and 3.3 times, respectively. The sale of high-end laser TVs with a unit price of more than 15,000 yuan grew by 90 percent year-on-year, while more than 35,000 large-screen smart TVs over 60 inches were sold.

Data from another leading Chinese e-commerce player Pinduoduo show strong consumption demand in third- and lower-tier cities during this year’s 6.18 shopping festival. A large number of consumers from counties and towns purchased products such as sweeping robots, bread-baking machines, and projectors on the platform for the first time.

According to Alibaba’s e-commerce platform Tmall, people aged between 18 and 35 accounted for a large proportion of China’s luxury consumers, and those from third- and lower-tier cities increased rapidly, with an annual growth rate of 1.5 times that of those in first- and second-tier cities.

Some entry-level international luxury brands including U.S.-based Coach have opened stores in small cities and counties in China over the past two years to attract young people there.

Statistics from U.S. cosmetic giant Estee Lauder show that buyers of its cosmetics are distributed in 350 cities in China with 70 percent of its orders coming from cities without a franchise. French luxury brand Dior’s lipsticks, Japanese cosmetics brand SK-II’s essence serum and Shiseido’s sunscreen represent the consumption trend of young consumers in Chinese counties.

Thanks to consumption upgrading and an upgrade in lifestyle, young consumers in counties and towns are increasingly looking for higher-quality products.

Experts predicted that these consumers will become a major force in China’s consumption market over the next 10 years. The consumption of Chinese people in third- and fourth-tier cities is expected to reach 45 trillion yuan (over $6.7 trillion) by 2030.