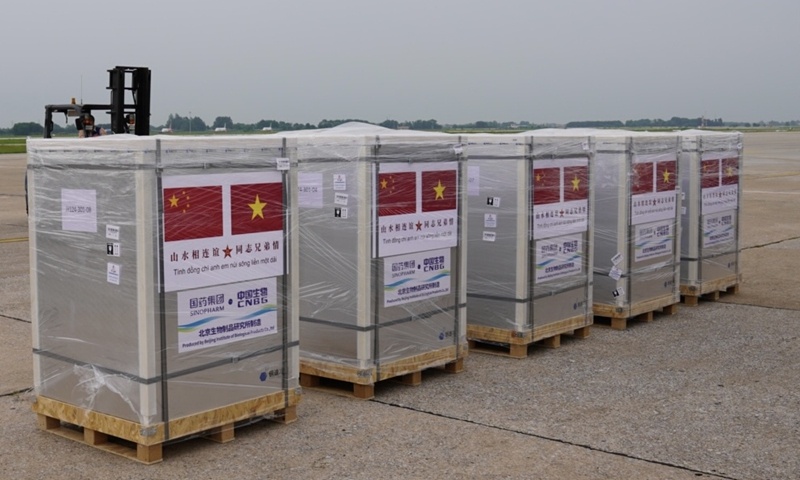 A shipment of COVID-19 vaccines arrive in Vietnam on August 23, 2021 as part of the aid from the Chinese military to the Vietnamese troops. (Photo: Chinese Embassy in Vietnam)

On Monday, a day before the visit from US Vice President Kamala Harris to Vietnam, a shipment of COVID-19 vaccines arrived in the country as part of the aid from the Chinese military to the Vietnamese troops. Experts said that the Chinese and Vietnamese armies have long maintained good cooperation, adding that to achieve its anti-China goals through strengthening bilateral relations with Vietnam is the US' wishful thinking.

China's Ministry of National Defense announced on Monday that, following the request from Vietnam, the Chinese People's Liberation Army (PLA) delivered a new batch of COVID-19 vaccines to the Vietnamese military.

According to Vietnam News Agency, Senior Lieutenant General Hoang Xuan Chien, Deputy Minister of the National Defense Ministry of Vietnam, said that the assistance on COVID-19 vaccine from the Ministry of Defense of China fully demonstrates the spirit of solidarity and mutual help between the two countries. Hoang also affirmed the military relations between Vietnam and China, saying that the relations between the two armed forces have always been an important pillar of the comprehensive strategic cooperative partnership between Vietnam and China.

Vietnam is currently experiencing the most serious wave of COVID-19. According to information released by the Ministry of Health of Vietnam, the country has recorded more than 10,000 new confirmed cases in a single day for five consecutive days, from August 19 to 23, raising the national tally of cases to 358,456.

Coincidentally, the vaccines donated by the PLA arrived in Vietnam the day before Harris. As planned, Harris will arrive in Vietnam on Tuesday after her visit to Singapore, becoming the highest-ranking US official to visit Southeast Asia since Biden took office. US Defense Secretary Lloyd Austin visited Vietnam on July 28, and Harris will be the second senior US official to visit the country in less than a month.

The BBC described Harris' visit as "part of a diplomatic charm offensive by the Biden administration in South East Asia," indicating the importance the US now attaches to the region. The report said Harris will use the recent donation of 23 million doses of COVID-19 vaccines, which gave an unexpected boost to the US image in Southeast Asia, to propose deeper medical and healthcare cooperation.

Commenting on Harris' Asian trip, Wang Wenbin, spokesperson of the Chinese Foreign Ministry, said at a press conference on Monday that "China always holds that exchanges between countries should be conducive to promoting mutual trust, peace and stability in the region and the world at large."

China will consent if Harris' visit to Vietnam is aimed at strengthening bilateral ties between the US and Vietnam, but if it intends to boost its anti-China goals, that will not be the case, Zhou Bo, research fellow of the Center for International Security and Strategy of Tsinghua University, told the Global Times on Monday.

Zhou said that as the US failed in its two-decade occupation of Afghanistan, it was expected to seek a way out by shifting to a stronger presence in the Asia-Pacific region. He added that the visit to Asia by officials like Harris could be seen as part of an effort to strengthen ties with countries in the region.

"It is certain that successive visits by US senior officials to Southeast Asia have the intention of targeting China but this is wishful thinking by the US," Zhou mentioned while he highlighted that "the remarks made by the Vietnamese military leader also expressed the good relations between China and Vietnam. The Chinese and Vietnamese militaries have maintained cooperation in various fields for a long time. China's support to Vietnam is not only reflected in vaccine assistance, but also in other aspects such as personnel training."

Zhou noted that China is Vietnam's largest neighbor, and the two countries have close economic and people-to-people exchanges. Although there are some controversial issues, the two sides are committed to resolve them through peaceful negotiations and consultations, not by force.

"So, neither Vietnam nor any other country will jump into the US chariot because of the frequent visits by officials," Zhou said.