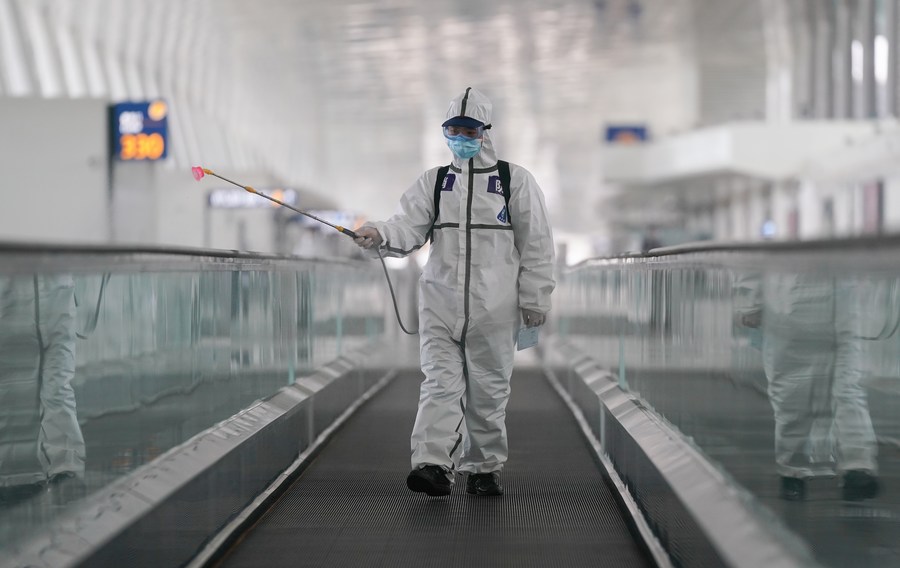 Chinese customs has further tightened controls over potential imported monkeypox infections following the World Health Organization's designation of the contagious disease as a global health emergency over the weekend.

All inbound international travelers that arrive in China from countries affected by monkeypox and that have come into contact with infections or have experienced symptoms such as fever, headache, swelling of lymph nodes, and rashes covering large areas, should report their condition to customs, according to a notice released by the General Administration of Customs on Monday.

Customs workers will take "medical measures" and test them for the virus, said the notice.

Meanwhile, carriers or owners of contaminated transport vehicles, containers and cargo, as well as those suspected of being contaminated by the virus, should implement required quarantine and sanitary measures, it said.

These measures took effect immediately and will last for six months, while the administration said it will continue to adjust virus control measures at ports based on the latest outbreak situation.

The WHO announced on Saturday that monkeypox constitutes a global health emergency of international concern, a status that has only been applied before to polio and COVID-19 and that is meant to spur the international community to mount a coordinated response.

"There are now more than 16,000 reported cases from 75 countries and territories, and five deaths," said WHO Director-General Tedros Adhanom Ghebreyesus during a news conference on Saturday.

The WHO currently believes that the risk of monkeypox is moderate globally, except in the European region where experts have assessed the risk as high. However, there is a clear risk of further international spread, he said.

"We have an outbreak that has spread around the world rapidly, through new modes of transmission, about which we understand too little, and which meets the criteria (for a public health emergency)," said Tedros.

"Normal groups in China are not at risk of infection, and if imported monkeypox infections are reported, their close contacts are at risk," it said in a statement released in late June.

Wu Zunyou, chief epidemiologist at the China CDC, said on Monday that it is "only a matter of time" for monkeypox to spread to the mainland. However, due to the virus' limited transmission speed and route, Wu said that monkeypox's impact will be far less than the novel coronavirus and it will not cause a large-scale outbreak in China.

He cited that about 95 percent of the cases reported in Europe and America were transmitted through sexual activities, with men who have sex with men being the most vulnerable group.

"Many of our disease control measures targeting COVID-19 are precise and scientific, and to some extent these measures can also contain monkeypox," he said during an interview with Health Times, a newspaper administered by People's Daily.

Chinese authorities have already taken a series of preventive measures to ward off the virus.

The National Health Commission said in a guideline on monkeypox prevention that was issued on July 1 that inbound travelers will undergo a monkeypox screening along with COVID-19 testing during their quarantine period.