The giant bronze statue of Guan Gong (or Guan Yu), the renown ancient Chinese general from the Han Dynasty (206 BC-AD 220), in a park in Jingzhou, Central China's Hubei Province, may have to find another place to stay, after drawing criticism from China's authorities and public who said that its obtrusive size and incompatible appearance have damaged the style and historical context of the ancient city. 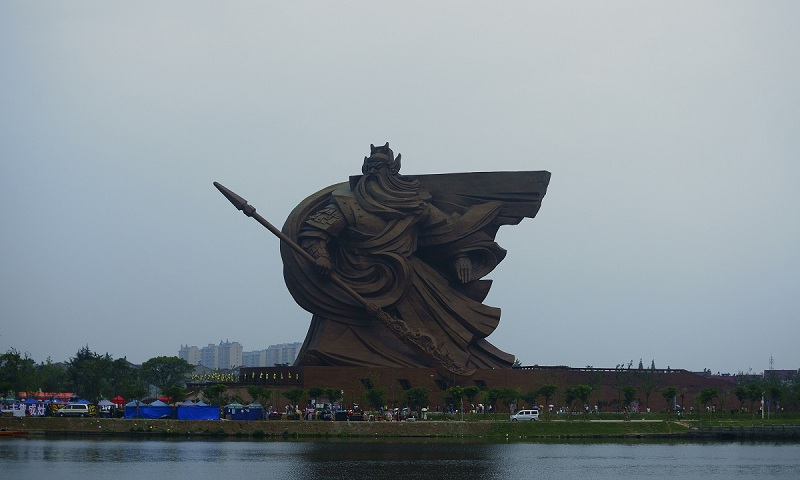 Jingzhou has organized experts from planning, architecture, sculpture, and cultural protection areas to formulate a relocation plan for the statue, the Jingzhou government announced on Tuesday, after state broadcaster China Central Television (CCTV) revealed on Monday that local authorities have been turning a deaf ear to conversations about the two-year-long construction of the statute which actually didn't acquire any official approval.

Covering an area of 228 mu (15.2 hectares) and weighing more than 1,200 tons, the illegally-built statue measures 57.3 meters in height, surpassing almost double the 24-meter height limit on buildings where the statue is located, CCTV reported.

Qin Jun, deputy director of Jingzhou's natural resources and planning bureau, admitted that the statue is still "too big and tall," although he noted that there is no explicit height limitations on sculptures in the city's planning rules.

The statue stands in a Guan Yu-themed park which began construction in 2014 and operation in 2016. The whole project was built to boost tourism based on the image of Guan Yu and the ancient cultural background of Jinzhou, a city that was listed in the first batch of 24 famous historical and cultural cities in China in 1982 which includes Beijing, Xi'an of Northwest China's Shaanxi Province and Lhasa of Southwest China's Tibet Autonomous Region.

The whole statue, however, didn't gain approval from the relevant authorities, except for its base, a two-story building called the Guan Gong cultural exhibition center. It didn't pass fire control inspections either before its operation started, reports said.

The statue alone cost about 170 million yuan ($25.9 million); however, its poor operation only earned revenue worth less than 13 million yuan in the past four years, far from what was expected, according to media reports.

It came under the spotlight in July when media reports said it is sinking and built without permission from local planning authorities, causing concerns over safety risks and legality.

China's Ministry of Housing and Urban-Rural Development (MOHURD) issued a notice on October 8, pointing out that the giant Guan Gong statue damaged the style and historical context of the ancient city, ordering the local government to rectify the project.

"The special working group and relative departments are making every effort to carry out rectification on this project," an official from the local government told the Global Times, refusing to explain in detail about any progress.

The government's announcement to move the statue, however, caused another round of criticism for wasting resources and money. Many asked to keep the statue considering its huge cost while others questioned that the supervision from local government has been absent since it began construction, and some local authorities are taking the wrong paths to boost tourism.

"Build it and then tear it down, how much money will be spent on this?" a Sina Weibo user asked.

"The statue wasn't built in one night. The case should be investigated thoroughly," another netizen said.

"Relocation would cost a lot of money. Why not just keep it and explore further development using existing resources?" another said.