CHINA Cooperation with China needed amid stalled talks with the US

Cooperation with China needed amid stalled talks with the US 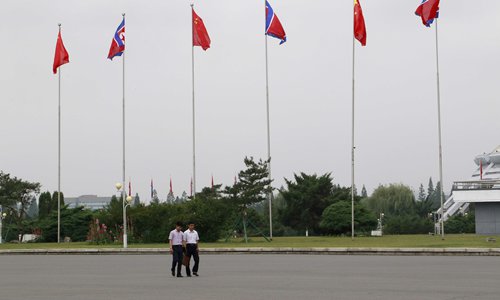 A steady development of relations between China and North Korea has been prominent in recent weeks, with increasing governmental and civil exchanges across the border. Analysts believe that part of the warmer ties is a result from Chinese President Xi Jinping's recent visit to Pyongyang and stalled nuclear talks between the US and North Korea.

The two sides discussed boosting exchanges and contact between the two countries' courts, and creating legal circumstances and favorable conditions for the development of bilateral relations. A memorandum of understanding on friendship, cooperation and exchange between the Central Court of North Korea and the Supreme People's Court of China was signed after the talks, said the report.

Besides such frequent high-level communication on the legal front, a number of civil exchanges have been held in recent weeks to mark the 58th anniversary of the signing of the North Korea-China Treaty of Friendship, Cooperation and Mutual Assistance.

Talks were held between Kim Song-nam, a first vice department director of the Central Committee of the Workers' Party of Korea, and Song Tao, head of the International Department of the CPC Central Committee, in Beijing on July 11, according to the KCNA.

Wang Hui, an associate research fellow with the Northeast Asia Research Center of Jilin, told the Global Times that the apparently increasing exchanges on law enforcement and judicial cooperation are a result of Xi's visit to North Korea in June and the North Korean leader Kim Jong-un's four visits to China since March 2018.

"Both leaders stressed the need and willingness to strengthen Party communication and people-to-people exchanges in their meetings. Cooperation on law is an expansion of Party exchanges and shows pragmatism in bilateral ties," Wang said.

A source from China's Ministry of Public Security told the Global Times that law cooperation between the two countries is just the beginning.

Wang noted that a possible purpose of the MPS' visit was to seek a solution for North Korean escapees.

"A sensitive issue between China and North Korea is defectors attempting to escape North Korea through China. The two sides might discuss joint efforts to solve the issue," Wang told the Global Times.

Keen to learn from Beijing

Indicators of warming relations between China and North Korea are not hard to find these days, especially after Xi's visit in June, analysts observed.

During his visit, Xi emphasized the need to strengthen high-level contact to guide the development of bilateral relations. He also said that China is ready to work with North Korea to conduct exchanges and cooperate in such fields as education, health, sports, media and youth, the Xinhua News Agency reported.

Meanwhile, Kim said that his country is willing to learn more experience from China and will endeavor to develop the economy and improve its people's livelihood, said the report.

An anonymous Chinese diplomat told the Global Times that governmental exchanges between China and North Korea are to implement the consensus between the two leaders.

In mid-July, the Information Department of China's Foreign Ministry, and a group of media representatives, paid a visit to North Korea, which was the first official visit of Chinese delegations after Xi's visit.

Zhang Lingyun from Phoenix TV, a member of the delegation, told the Global Times that three North Korean media outlets said that they want Chinese media to report on what's really going on in North Korea. Zhang said that the country is changing in many aspects compared with her previous business trips there. Zhang said that many hotels which receive foreign guests provide Wi-Fi and charge less for the service, and taxis are quite popular in downtown Pyongyang.

Zhang noted that the North Korean economy is still affected by international sanctions, with slow development in tourism and economic projects.

An Guoshan, a deputy dean at the Northeast Asia Research Institute of Yanbian University, revealed that North Korea is eager to learn from China's laws regarding economic development during the initial stages of China's reform and opening-up, such as on land and taxation.

"Obviously, North Korea wants to draw from China's experience in the development of their legal system and opening-up. The country does not have sufficient laws. Meanwhile, due to intertwined interests between different government organs, laws and regulations are difficult to enforce," An told the Global Times.

An believes that North Korea is bound to develop economy as Kim announced a strategic shift toward economic development in 2018.

Now, the nuclear issue is still pending in the Korean Peninsula despite three meetings between Kim and the US President Donald Trump. The two countries are mired in a diplomatic impasse, disagreeing about what each side should concede.

Since the nuclear issue cannot be solved easily, a better option for North Korea is to focus on economic development and strengthening cooperation with traditional allies such as China and Russia, experts said.

"As Trump gears up for his 2020 re-election campaign, so long as there is no nuclear weapons or ICBM testing in North Korea and the peninsula is quiet, the US will accept the status quo. In the meantime, Pyongyang is looking to erode sanctions and shore up relations in the region, especially with China and Russia," said Robert A. Manning, a senior fellow of the Brent Scowcroft Center for International Security at the Washington-based Atlantic Council.