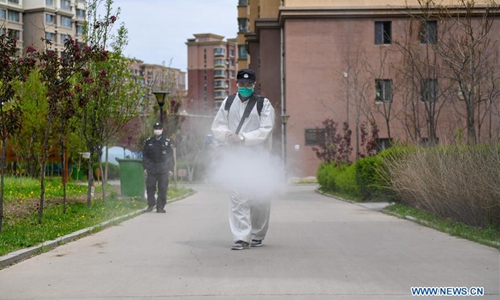 The fecal water from a ruptured sewage pipe had polluted the surrounding environment, later caused neighboring residents to be infected with the coronavirus, Yuan Jun, deputy director of the Center of Disease Control in Guangzhou, said at a press conference on Friday, when sharing that a cluster previously occurred in a village near the city.

The two earliest cases of this epidemic spreading through the village were found in a family living on the second floor of a residential building. In the follow-up investigation, six cases of COVID-19 were found at another two apartments.

The infection route was difficult to track, mainly because all six new cases, living on the first and second floors, had no close contact with other infected residents, and although their buildings were next to each other, they had no existing windows connecting them, Yuan said.

However, later research indicated that a dozen environmental samples collected from around the three buildings tested positive for COVID-19.

The CDC quickly carried out an investigation at the resident buildings, finding a 10-centimeter hole in a PVC sewer pipe which makes its way down the second floor, where the first two cases live.

In fact, it turns out that the toilet's fecal water of the first two infected residents, whose toilet also tested positive for coronavirus, had leaked from the pipe, and later spread to the other two buildings due to heavy rain, infecting more areas, Yuan explained.

The coronavirus was then brought home by other residents who walked through the polluted areas and got themselves infected. "We came to the conclusion that the cluster was caused by environmental pollution," said Yuan.

Yuan noted that shops, KTVs, bars, restaurants, elevators, and other places with poor ventilation are the most likely places for infectious transmission to occur, adding that areas such as urban villages with poor environmental hygiene are more likely to experience transmission.