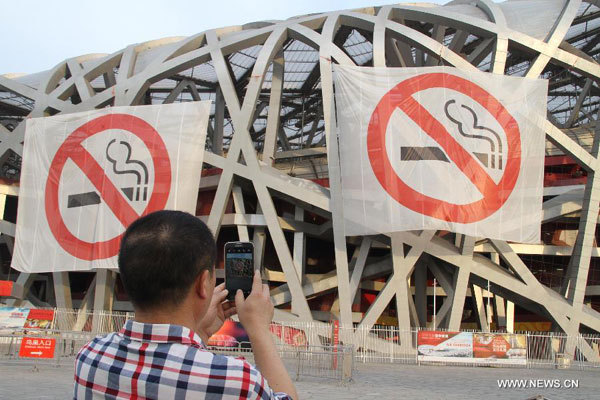 Smokers have become more willing to quit amid the COVID-19 outbreak as health becomes the first priority, according to a recent survey and related studies by an institute affiliated with Fudan University in Shanghai.

The survey, which was published on Saturday ahead of this year's World No Tobacco Day on Sunday, showed that around 18 percent of respondents said they had a stronger willingness to quit smoking after the epidemic outbreak, and 14 percent said they had attempted to abandon smoking in recent months.

The average number of cigarettes smoked per day decreased from 14.2 to 13.5, according to the online survey, which had nearly 1,500 respondents from 31 provincial-level regions and was conducted in March by Fudan's Health Communication Institute.

The top three reasons to reduce smoking were a higher awareness of health during the epidemic; the inappropriateness to smoke at home during isolation; and the inconvenience of smoking as one is required to wear a mask outdoors. All three reasons were selected by around two-thirds of the respondents.

"The 18 percent of people who expressed a stronger willingness to quit smoking was a considerable percentage among the country's 300 million regular smokers," said Zheng Pinpin, head of the tobacco control center of the institute.

"I believe the actions taken to quit smoking when people are thinking about smoking due to the influence of the epidemic will help promote tobacco control," she said.

However, the survey also found some smokers have misconceptions about smoking and the coronavirus, with 11 percent believing that tobacco carries disinfection properties and more than 10 percent believing it can prevent infection from COVID-19.

"The World Health Organization clearly stated that smokers face higher threats of becoming severe cases and even death after being infected with the virus. Such findings remind us that better communication of knowledge is required for the public," Zheng said.

Novel support groups on WeChat, where doctors and psychologists can provide professional advice around the clock and members can access personalized scientific information every day, have helped people quit smoking, according to the institute, which introduced such support groups last year.

The institute said 200 smokers were recruited in a case-control study last year to see the effectiveness of such support groups.

The study found that after intervention from the support groups for three months, 25 percent of the participants took action to quit smoking, compared with 11 percent for the control group. Those who took action said they had stopped smoking when interviewed again after three months.

Lu Kai, a 32-year-old father in Shanghai, joined a similar online support group in July, and has not smoked ever since.

Lu, who started smoking at 20, said that he received strong support from the psychologist in the group, who constantly reminded him to think about his family and two children when he felt the urge to smoke.

Data from the Tobacco Control Office of the Chinese Center for Disease Control and Prevention showed that secondhand smoke raises the risk of lung cancer by 20 to 30 percent, and the risk of suffering from the disease among women whose husbands smoke is almost double that for those whose spouses do not.