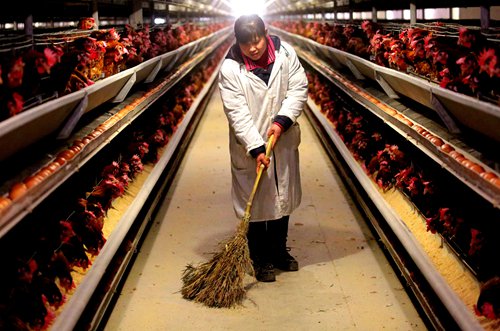 The poultry industry is bracing for the effects of the coronavirus on China’s most affected areas because of the extreme shortage of feed and tighter transportation controls, industry groups and insiders said.

Due to logistics curbs that have locked down transportation in Central China’s Hubei Province where the novel coronavirus was first identified, poultry businesses are in dire need of feed supplies, Wu Zhimin, a member of staff at the poultry association of Hubei, told the Global Times on Friday, adding that existing feed stocks would only last for three to five days for most poultry farms in the province.

The Hubei Poultry Association had sent a letter to the China Animal Agriculture Association on Tuesday, calling for feed suppliers to deliver at least 18,000 tons of corn and 12,000 tons of soybean meal, but Wu said the actual deficit “could be even larger,” as the province’s poultry industry consumes 3,000 tons of feed daily.

However, no supplies have reached the poultry farms as of press time, due to transport restrictions, Wu said. Some poultry farmers are lining up in front of feed factories still operating in Hubei, while others are reducing the daily feed in hopes of making it last longer.

A poultry farmer in Hubei, who spoke on condition of anonymity, told the Global Times that the company had prepared feed that is expected to last around a week prior to the Spring Festival, but stocks will “run out very soon,” and millions of chickens will die without new supplies.

Poultry farmers are also strained by inventory shortage of livestock and eggs. Since butcheries in the province are closed, the livestock cannot be slaughtered for easier and longer storage, and eggs will start to turn bad if outbound transportation restrictions are extended, Wu said.

Hubei is the sixth largest poultry producing province in China, with around 348 million annual stock and over 532 million annual marketable stock. Experts warned that although the solution depends on the effective containment of the outbreak, transportation controls should be urgently addressed before they affect the prices of poultry products in more areas.

“If the products cannot be sold, the prices will fall in those areas, but it may also push up poultry prices in areas that are cut off from the supply,” Li Guoxiang, a research fellow at the Rural Development Institute of the Chinese Academy of Social Sciences, told the Global Times on Friday.