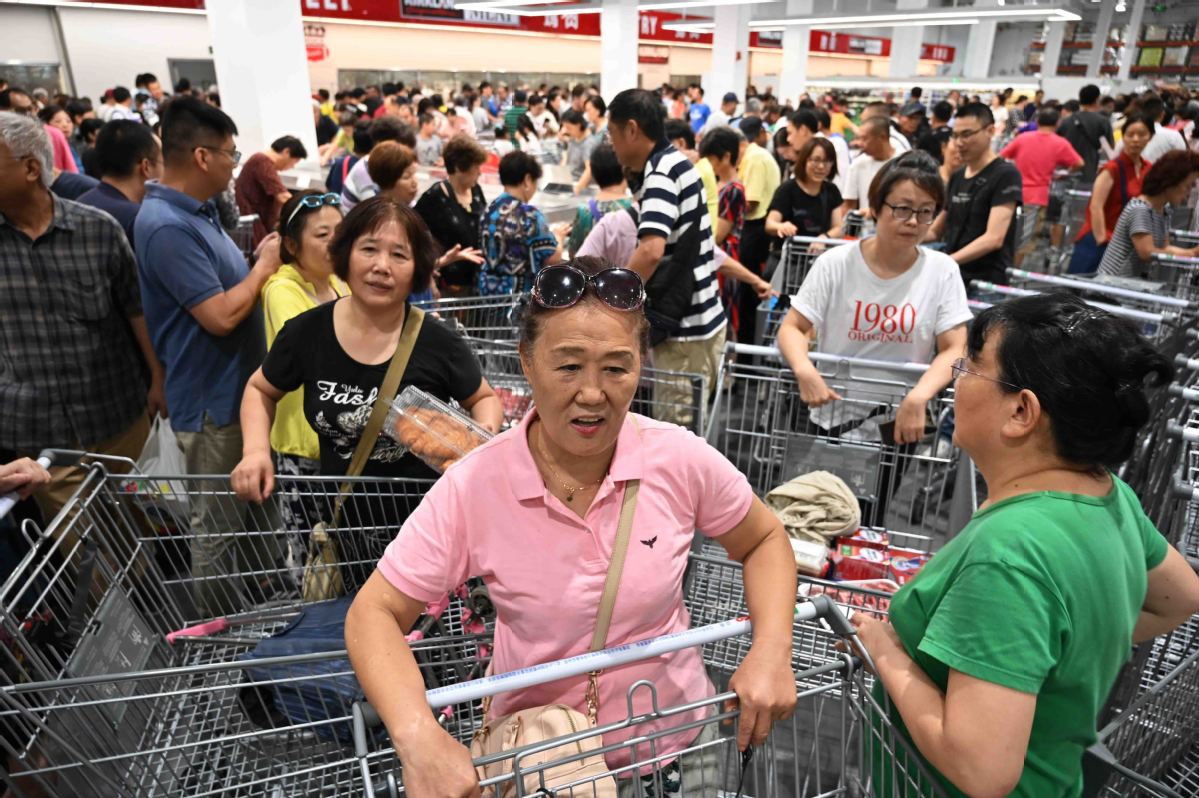 Shoppers flock to Costco Shanghai, the first Costco outlet on the Chinese mainland, on the store's opening day on Tuesday. (Photo: AFP)

The world's second-largest retailer, Costco Wholesale Corp, got an exceptionally warm welcome from consumers when its first brick-and-mortar store on the Chinese mainland opened in Shanghai on Tuesday.

Despite the store's location in suburban Shanghai, with no close public transportation, consumers in Shanghai and from neighboring cities flooded in before its 9 am opening hour. At 1 pm, the store put up a notice saying it had suspended sales due to the heavy crowds.

Costco did not disclose the number of consumers who visited its store on Tuesday.

Jason Yu, general manager of market consultancy Kantar Worldpanel China, said the quality and good prices of Costco's food products are a major attraction to Chinese consumers, as the demand for such products has grown. The retailer could bolster its fresh food offerings to increase their customer retention rate here, Yu said.

"As Chinese consumers put more stress on healthy products and higher living standards, the retail industry's growth has remained robust in China and the momentum will continue," he said.

Wang Caidi, 57-year-old retiree in Shanghai, left the store with avocados, cheese, milk and a pizza. She said quality foods enticed her to travel the 40 kilometers to the store.

"The products are of good value. I may come here one month later when it is less crowded," she said.

Membership at Costco Shanghai has been available since July 1, with an annual membership card priced at 299 yuan ($42). The company put its Chinese membership at over 120,000.

The store, with a shopping area of 14,000 square meters, is located in suburban Minhang district, nearly 30 km from the city's center.

Richard Zhang, Costco's senior vice-president for Asia, said on Aug 20 that the location was influenced by the presence of seven international schools in the area, indicating a large group of middle class consumers who are Costco's targets.

He also said that the market has matured sufficiently for Chinese consumers to be "ready to pay for a membership card". Little effort was spent on educating the market about membership.

While membership-based hypermarkets have been successful, other overseas retailers have mostly received a cold shoulder from Chinese consumers.

On Monday, the State Administration for Market Regulation gave the green light to Suning.com to acquire an 80 percent stake in French supermarket giant Carrefour's China business.

In March, German retailer Metro was reported to be selling its Chinese business, with Tencent and Alibaba appearing on the potential buyers list.