CHINA Could a partial solar eclipse affect the Chang'e-4 mission?

Could a partial solar eclipse affect the Chang'e-4 mission? 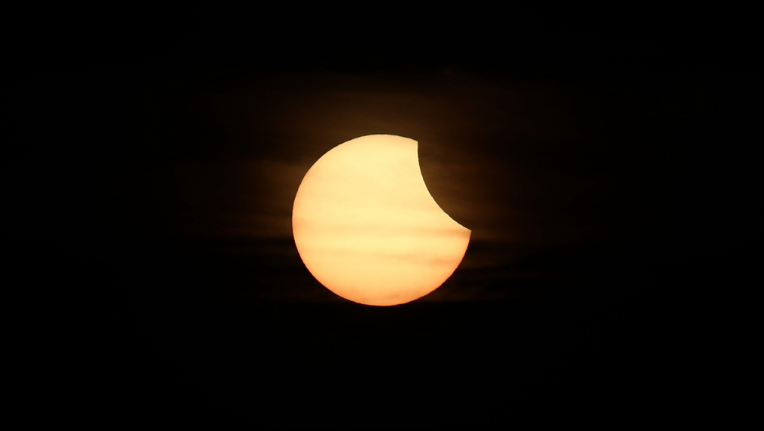 A partial solar eclipse will bring some romance to the first weekend of 2019.

The phenomenon will be visible from East Asia – most notably over Siberia, much of Mongolia, northeast China, Japan, the Democratic People's Republic of Korea and the Republic of Korea. Around the time of local sunset, the penumbra will also sweep a large swath of the North Pacific Ocean, as well as southwest Alaska, including the Aleutian Island chain, according to space website Space.com.

Partial solar eclipses happen when the Moon comes between the Sun and Earth, but the Moon only partially covers the Sun.

Here are some tips from NASA for you to watch the partial solar eclipse safely:

- Do not stare continuously at the Sun.

- Take breaks and give your eyes a rest.

- Do not use regular sunglasses but instead special glasses to observe the Sun.

Will Chang'e-4 be affected by the solar eclipse?

China's lunar probe Chang'e-4 made a historic landing on the far side of the Moon on Thursday, becoming the first ever spacecraft to make a soft-landing on the Moon's uncharted side.

Since the electrical power of Chang'e-4 is generated by solar panels, there has been concern about whether the solar eclipse could affect the probe's operation.

"The partial solar eclipse won't have much influence on the Chang'e-4 probe," said Zhu Jin, curator of the Beijing Planetarium, adding that irrespective of solar eclipses, the Sun always shines on half of the Moon because of the tidal locking phenomenon.

However, the relay satellite Queqiao might be affected by the upcoming solar eclipse, according to Zhu.

He said that during the eclipse, the Moon will be in the middle between the Sun and Earth, and the satellite, which is orbiting the Earth-Moon Lagrange Point L2, might be affected by the Sun Outage phenomenon.

"Radiation generated by the Sun might interfere the signal from Queqiao to both the Earth and the Chang'e-4 probe," Zhu told CGTN.

Besides the partial solar eclipse, astronomy enthusiasts have four more eclipses left to watch in 2019, according to NASA.

A solar eclipse always occurs about two weeks before or after a lunar eclipse. Described by NASA as the "most dazzling show," this astronomical phenomenon consists of a total lunar eclipse, a super blood Moon and a "Wolf Moon," a nickname for a full Moon that appears in January. The Super blood wolf moon eclipse will be visible throughout the United States.

A total solar eclipse will appear over southern parts of Chile and Argentina, and parts of the South Pacific.

On the 50th anniversary of the launch of the first Moon landing mission, Apollo 11, people living in South America, Europe, Africa, Asia and Australia will be able to see a partial lunar eclipse.

The year will end with a rare "ring of fire." An annular solar eclipse occurs when the Moon is too far away to completely cover the Sun's disk.