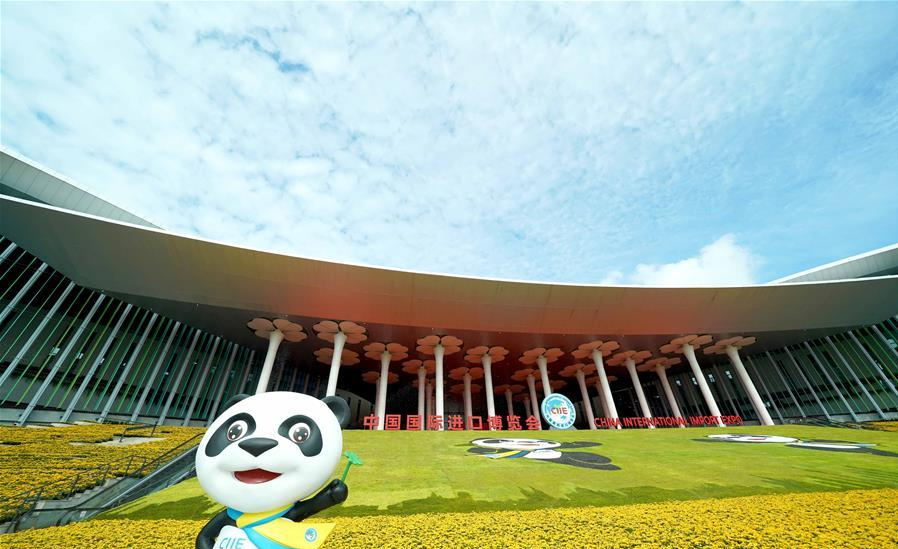 Mascot Jinbao of CIIE stands in front of the venue. (Photo: Xinhua)

BEIJING, Nov. 4 (Xinhua) -- As the first China International Import Expo (CIIE) nears, officials and entrepreneurs around the world aim to seize the opportunity to explore the Chinese market, voicing greater confidence in China's further opening up.

"We understand the CIIE as ... showcasing China's greater openness to importers. These are all moves in the right direction," World Bank Group President Jim Yong Kim said. "We support what China is doing to expand imports and address global trade imbalances."

Lithuanian President Dalia Grybauskaite told Xinhua that "the expo is a 'win-win' event for both, China and the world, as it provides new opportunities for cooperation, helps companies across the globe enter the Chinese market and paves the way for China to satisfy its growing demand for high-quality products."

Pakistan is confronted with current account deficit and the CIIE "is a great opportunity for Pakistan to have a pavilion where we will be exhibiting our exports," Pakistani Prime Minister Imran Khan said.

Khan hailed China's reform and opening up policy which provides Chinese industries a better environment to compete in international trade. "China has set a good example," he said.

Madagascar will showcase products such as vanilla, cocoa beans, coffee beans and minerals at the CIIE. China offers a great opportunity for everyone, and everyone must know how to seize this opportunity, Minister of Tourism Jean Brunelle Razafintsiandraofa told Xinhua.

"Australia thinks it (the CIIE) is a great celebration of ... the economic contribution that China makes to the region and the world. That is why we're delighted that some 180 Australian businesses and brands are participating," said Australian Minister for Trade, Tourism and Investment Simon Birmingham.

"We are in global markets, we are all together and we want to cooperate," Israeli Scientific Minister Ofir Akunis said, adding that it is a "very good idea" and the "right way" that China hosts the CIIE where people from all over the world will meet meet on cooperation in the future.

"I think (the CIIE) is a great opportunity to show the players in the global economic environment the opening of China to world trade, and it is also a contribution to the growth of the global market," Marco Tronchetti Provera, CEO of Italian-Chinese tyre maker Pirelli, told Xinhua.

The CIIE, a significant move by the Chinese government to further open the Chinese market, has attracted about 2,800 exhibitors from over 130 countries and regions. Economic and trade exchanges are bringing more benefits to all sides.

"We are going to Shanghai to represent more than 89 of our members who are able to export a range of products (to China)," Sandile Ndlovu, Executive Director of the South African Aerospace, Maritime and Defence Export Council, said. "China could be one of our biggest customers as there is so much potential for trade with China."

Marathon Ginseng, a US Wisconsin-based ginseng grower, will have a stall at the CIIE. It registered for the expo the first time it heard of the fair.

"It is a big event in China," Jiang Mingtao, founder of Marathon Ginseng, told Xinhua. "We hope to enhance the reputation of ginseng produced in the state of Wisconsin ... and let more Chinese consumers know our products."