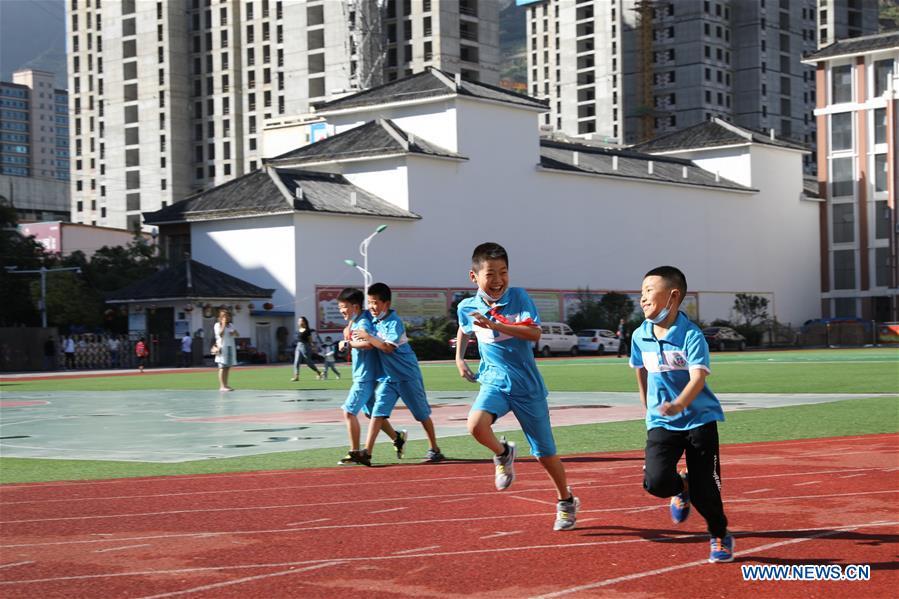 Pupils run on the playground at a primary school in Longnan city, Northwest China's Gansu province, on Aug 31, 2020. (Photo: Xinhua)

When the People's Republic of China was founded in 1949, about 80 percent of the population was illiterate and only 20 percent of school-age children were enrolled at primary schools.

In 2020, the net enrollment rate at primary schools was 99.95 percent, and the gross enrollment rate (GER) at preschool was 85.2 percent, with 102.5 percent for middle schools and 91.2 percent for high schools. The GER can be higher than 100 percent as it includes students who may be older or younger than the official age group.

The illiteracy rate declined to 2.67 percent last year from 4.08 percent in the previous census conducted in 2010, according to the seventh national census.

The country has more than 500,000 primary and secondary schools, with almost 240 million students.

Lyu Yugang, director of the Ministry of Education's Department of Basic Education, said that during the 13th Five-Year Plan period (2016-20), nine-year compulsory education achieved universal coverage, and marked progress has been made in popularizing preschool and high school education.

Ensuring all students have access to compulsory education is an important part of the country's poverty alleviation efforts, and the ministry has made great effort to prevent students from dropping out of school, Lyu said.

China has effectively ensured that no student will drop out of school due to financial difficulties by offering financial aid to those from impoverished households, exempting all students from tuition and fees, and providing meal subsidies for about 40 million rural children every year, said Zheng Fuzhi, vice-minister of education.

He noted that conditions in rural schools have been improved, with 221 million square meters of school buildings built or renovated between 2013 and 2019.

About 950,000 teachers have been recruited to work at 30,000 primary and secondary schools in around 1,000 rural counties to raise the quality of education in less developed areas.

Lyu said that the country has completed the historic tasks of ensuring all students have access to basic education, and is striving to achieve more balanced, and higher-quality education.

The 2018 Program for International Student Assessment, hosted every three years by the Organization for Economic Cooperation and Development, found that 15-year-olds in Beijing, Shanghai and the provinces of Jiangsu and Zhejiang ranked No 1 in all three core subjects and achieved the highest Level 4 rating.

Angel Gurria, former secretary-general of the OECD, wrote in the preface of the latest report that the performance of the four mainland regions was impressive, as their income levels are below OECD average.

Fifteen-year-old students in the four mainland regions outperformed their peers in all the other 78 participating education systems in mathematics and science by a wide margin.