China is speeding up mass nucleic acid testing for COVID-19 amid a flareup of cases driven by the highly contagious Delta variant, authorities said. 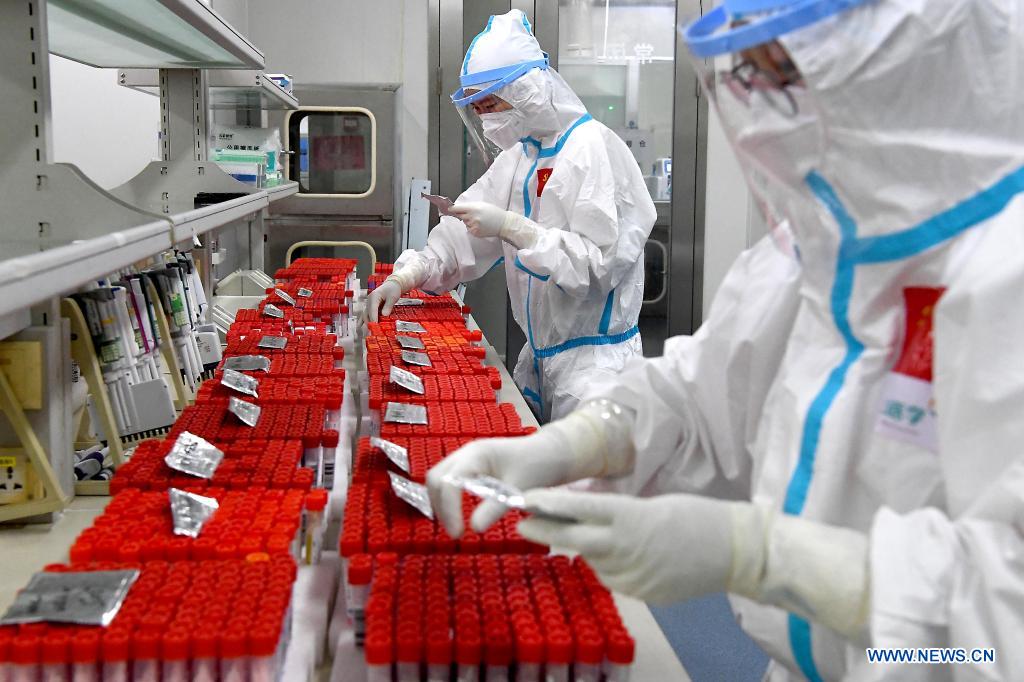 Mass testing of populations of more than 5 million people should be completed within three days, the State Council joint prevention and control mechanism said in a notice released on Tuesday. This compares with a previous time limit of three to five days specified by the mechanism in early February.

For populations of 5 million people or less, the period to complete the tests remains unchanged at three days.

The new requirements were announced after 17 provincial-level regions were confirmed on Aug 4 by the National Health Commission to have local confirmed cases. The outbreaks, triggered by the Delta variant, have seen multiple rounds of mass testing in cities and regions with clusters of COVID-19.

The Chinese mainland reported 83 confirmed local infections on Tuesday, with nearly two-thirds in Yangzhou, Jiangsu province. Another 28 travelers arriving from overseas were identified with the virus, the commission said.

Yangzhou, with a population of about 4.56 million, has carried out five rounds of large-scale testing since July 28. The sixth round kicked off on Wednesday, said Wang Jinsong, deputy director of the city's health commission. A total of 1.6 million people were tested in the fifth round and 25 positive cases were detected, he said. To date, 448 cases have been confirmed in the city.

The outbreak in Yangzhou has been traced to neighboring Nanjing, the capital of Jiangsu, where nine cleaners at an international airport were detected with the virus on July 20. Since then, Nanjing has launched six rounds of mass testing, with 233 cases detected. The latest one wrapped up on Monday, with two new infections confirmed, the city government said.

Bao Changjun, a local disease control official, said at a news briefing on Wednesday that positive samples detected from the last three rounds of testing were all concentrated in centralized quarantine facilities or home quarantine situations. He said upcoming testing will only focus on smaller areas where new infections have been reported in recent days.

Zhangjiajie, a tourist city in Hunan province, has rolled out six rounds of mass testing. Zhengzhou, in Henan province, which was hit by heavy flooding last month and has a population of 12.6 million people, has conducted three rounds of testing. Several cities in Hubei province have completed one round.

Repeatedly testing for COVID-19 is necessary to tackle the more contagious Delta variant, especially in hot-spot regions, experts have said.

Kong Jiangnan, a researcher at the Henan Provincial Center for Disease Control and Prevention, said initial tests are likely to miss cases due to low viral loads in some infected people, unsuitable sampling areas or intermittent virus shedding.

Li Huifang, a Zhengzhou city government official, said one person tested negative seven times before being confirmed with the virus after the eighth test.

"This case demonstrates that the Delta variant is highly contagious, very covert, and often does not cause typical symptoms at the beginning," she said. "These traits pose higher requirements for our testing, detection and reporting systems."

One method to speed up mass testing is to test five to 10 samples together and only retest individual samples if the group result is positive.

The commission has also clarified procedures for handling group test results. Testing centers must immediately report a positive result to the local health authority, which will send an emergency team to retest the people initially detected.

Using these methods, Nanjing, which has a population of 9.31 million people and the capacity to conduct 1 million tests a day, can complete citywide testing in two to three days, Guo Yanhong, a health official, said recently.