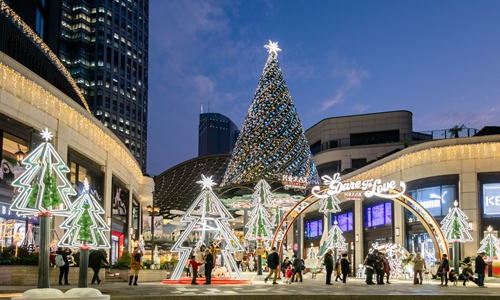 A Christmas tree in Shanghai in December. (Photo: Global Times)

A county in Southwest China's Guizhou Province has banned Christmas celebrations at schools out of concern for student safety, prompting experts to denounce Western media hype about such bans.

Chinese experts observed many Chinese people regard Christmas as a shopping festival and the ban has nothing to do with boycotting Western festivals for fear of the invasion by Western culture as claimed by some foreign media.

An employee with Qianxi county's education and technology bureau in Guizhou, surnamed Pan, confirmed the notice with the Global Times on Tuesday, saying the bureau has banned Christmas at local schools for years "out of concern for student safety."

Despite bans in some cities, Chinese-style Christmas celebrations could be still found on shopping streets in many cities on Tuesday.

For example, Christmas decorations were visible in malls, restaurants and office buildings in Beijing.

Christmas topped the hot topic list on China's Twitter-like Sina Weibo on Tuesday, and related hashtags have been viewed more than 4.3 billion times.

Many internet users shared photos of themselves decorating Christmas trees with families or colleagues and posted their Christmas wishes and presents from their loved ones.

For years, international media have been reporting on local Christmas bans in China and exaggerating those bans as a government pushback against a Western cultural invasion, experts said.

Zhi Zhenfeng, a legal expert at the Chinese Academy of Social Sciences in Beijing, told the Global Times that many Chinese people took the festival as an opportunity to have fun and it is purely their own choice whether or not to celebrate.

"A few individual cities ban the festival for city management or safety reasons rather than targeting Western festivals," Zhi said.

"We [Chinese people] do not take the festival seriously, but some Western media took it so seriously which instead reflects the lack of cultural confidence of Western countries," Zhi said.

Western media, "growing less and less confident about Western culture," was too sensitive about China, which is a big country with growing international influence and a profound culture, he said.