So far, farmers have planted over 35,333 hectares of apples in Luochuan, an average of 0.22 hectares each. Last year, 930,000 tons of apples were produced in the county, creating a comprehensive output value of 8.5 billion yuan. The per capita disposable income of apple growers hit 13,249 yuan, and the proportion of people living in poverty has been reduced from 4.89 percent at the end of 2014 to 0.66 percent today. 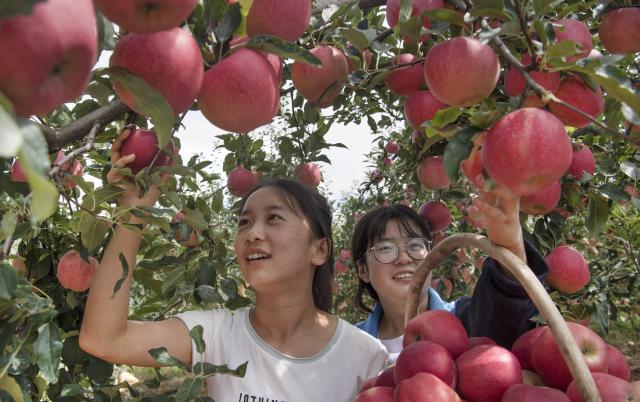 Luochuan piloted high-density planting of dwarf apple trees in Asi village in 2018 and began to spread the new planting method across the county.

The new planting method was seen as a specific solution that promotes high-quality development of the county’s apple industry. Currently, all towns and townships in the county have started to adopt the method, with a planting area of about 6,666.7 hectares.

“It was not convenient to irrigate apple trees and use large agricultural equipment on scattered land. We have now developed farm plots that meet high standards to promote agriculture mechanization,” said Dang Yongan, a farmer in Guju village of Fengqi neighborhood, adding that he had planted over 700 apple trees on about 0.47 hectares of land.

The model has reduced planting costs, made the quality of the apples more consistent, and ensured that apple growers can maximize their profits, said Dang Xuanmin, Party chief of the village, adding that the model reduces the amount of investment needed by about 25 percent.

“In addition to the input in apple orchards and advanced management expertise, Luochuan apples’ good reputation built over the years can also be attributed to the county’s quality traceability system and adherence to post-harvest management,” said Zhang Junqi, head of the county’s apple industry management bureau.

In 2017, the government of Yan’an introduced the idea of improving post-harvest management of its apple industry by focusing on aspects such as apple sorting, packaging, cold storage chain and marketing, so as to extend the industrial chain, increase the added value of the apple industry and help people boost their incomes in the entire industrial chain.

Currently, Luochuan has built 33 high-end intelligent apple sorting lines and cold storages with a capacity of 600,000 tons of apples. Shops selling apples from Luochuan are scattered throughout first-tier and second-tier cities across the country. The county’s apples are now being exported to 28 countries and regions, and high value-added products such as apple vinegar, cider and apple crisps are selling well both at home and abroad.

Luochuan is home to 728 registered e-commerce merchants, which help sell over 60,000 tons of apples each year, bringing in an annual sales revenue of about 800 million yuan.

In addition, Luochuan also recycles abandoned tree branches and reflective film used in the development of the apple industry and transformed them into wealth.

On display at an exhibition by Luochuan Qiquan Biomass Power Generation Co., Ltd. were more than 10 types of agricultural and forestry waste samples, including apple tree branches, trunks, bark, and maize straw.

“They can be directly compressed into fuel, or burned to turn the ash and slag into new building materials or the ash into organic fertilizer,” said the company’s general manager Li Yong.

The company can process 300,000 tons of agricultural and forestry waste annually and help farmers increase their income by 100 million yuan, Li said, adding that it can save 130,000 tons of standard coal and reduce carbon dioxide emissions by 250,000 tons.

The company purchases pruned apple branches and wasted fruit bags from farmers as raw materials to meet the requirements of a thermal power plant with an installed capacity of 40 megawatts. The heat generated by the power plant is then used to supply steam to the county’s apple vinegar plant. The company has created 147 job opportunities and helped over 1,000 people increase their incomes.

Tuji town in the county introduced a company to poverty-stricken Huanglianhe village to develop characteristic industries including edible mushroom cultivation based on apple tree branch waste, and agritourism based on the breeding of more than 10 rare birds.

“Green and modern development is an important indicator of the high-quality development of the apple industry,” said Wang Mingzhi, Party chief of Luochuan.

As the only certified countywide green food raw material production base in China, Luochuan will continue to improve the industrial chain, promote industrial cluster development, and give full play to the leading role being played by the apple industry, Wang added.