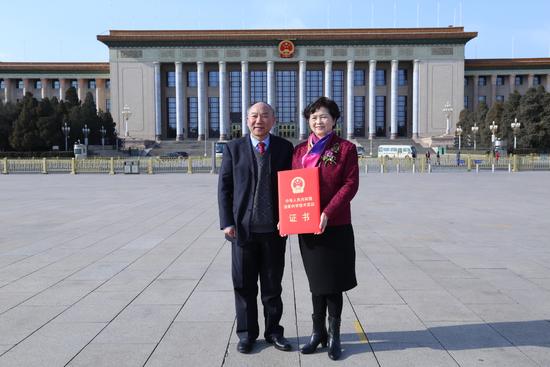 A couple on Monday was given China's highest science and technology award for their breakthroughs in preventing and controlling new infectious diseases like the H7N9 bird flu.

In 2013, an unknown respiratory disease swept across China's Yangtze River Delta area with a mortality of over 30 percent. Back then, cooked poultry, chicken in particular, was mistaken for the most likely source of infection.  Li Lanjuan of the Chinese Academy of Engineering reassured the public by having chicken in front of the camera.

The first affiliated hospital of the medical school of Zhejiang University then treated numerous patients infected with H7N9, in response to which the national key laboratory for infectious diseases, guided by Li, carried out research on its prevention and therapy.

As the head of the hospital, Zhen Shusen teamed up with Li and other researchers to work out solutions. Within 5 days, the H7N9 virus was identified and soon its genome sequence was released, which led to treatment which dramatically lowered the mortality rate.

“Patients are our top concern. My husband and I share the same goal to save patients,” said Li.

Past decades have seen a team guided by the couple dedicated to end-stage liver disease, which made breakthroughs on its occurrence mechanism. It is discovered that dysbiosis of the gut microbiota has a bearing on severe hepatopathy.

Thanks to Li and Zhen's efforts, China has taken the lead in microecology in just two years.