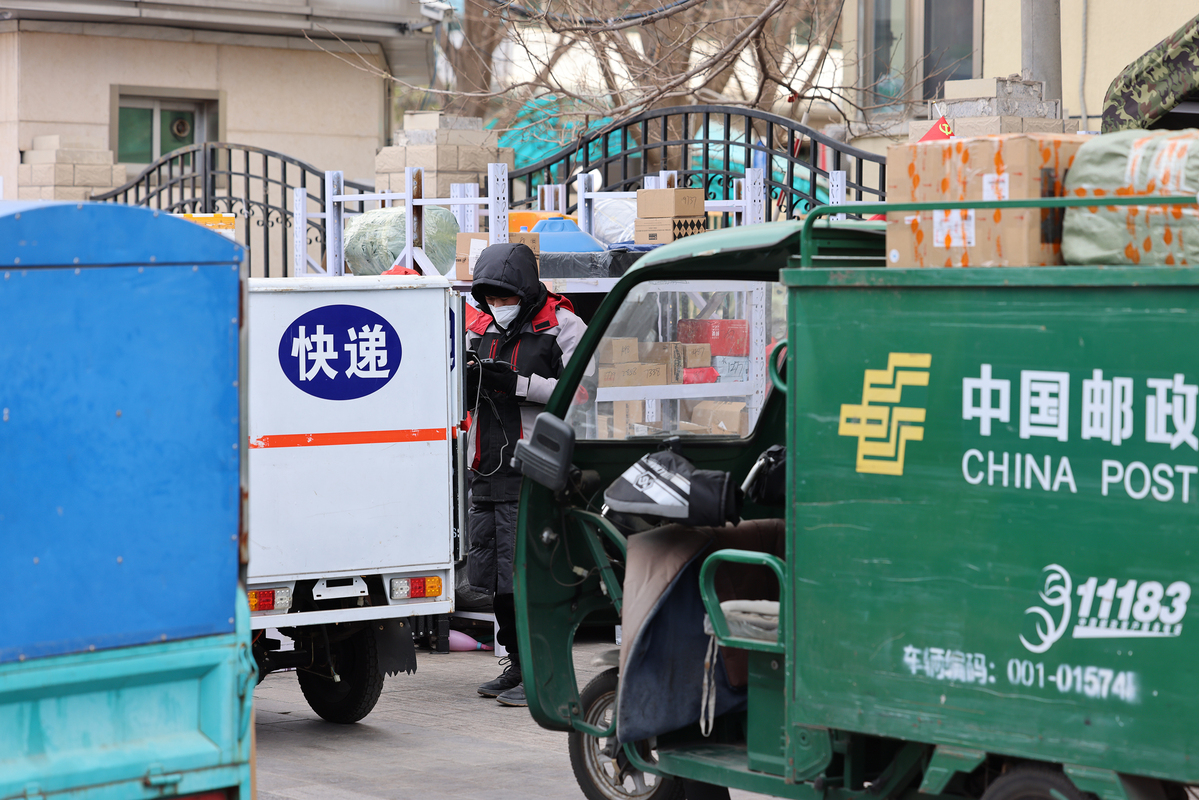 A photo shows a deliveryman at work in Haidian district of Beijing on Dec 15, 2022. (Photo: China Daily)

Couriers from across the country are banding together in support of Beijing to help relieve the city's backlog in deliveries.

As the delays to parcel deliveries in Beijing have drawn attention, the sector's regulator has urged companies to call in couriers from outside the capital to help ease the situation.

"We will work to overcome the labor shortage, and urge parcel delivery companies to dispatch couriers from other areas to support Beijing," said Liao Lingzhu, deputy director of the Beijing Municipal Postal Administration, adding that there are plans for some 3,000 couriers to be sent to the capital.

The administration drew up a work plan on Wednesday, setting up the goal of eliminating backlogged orders within two days and overcoming the shortage of couriers in a week to meet the city's basic delivery needs.

More than 1,000 couriers from JD Logistics, one of China's major delivery companies, arrived in Beijing on Wednesday. The figure is expected to reach 2,000 by Thursday.

The company is offering subsidies and minimum wages to encourage more assistance. JD Logistics has set up a fund to attract couriers to work in the capital. In addition to a minimum monthly wage of 9,000 yuan ($1,300), they are offering a daily subsidy of 200 yuan.

SF Express, another major parcel delivery company, is also bringing in couriers from other parts of the country to support Beijing.

Incentives will be given to couriers including those on duty and those returning to work after getting sick. Staff will be given seven days of paid sick leave.

YTO Express, another major parcel delivery company, is focusing on health and has ordered 100,000 N95 face masks and medicines to treat staff.

According to the State Post Bureau of China, the sector's regulator, 4.3 billion parcels were delivered between Dec 1 and Dec 12, a year-on-year increase of 5.6 percent.

China announced 10 new epidemic control measures on Dec 7 and parcel deliveries have continued to improve, with daily volume of packages remaining above 360 million.

However, many customers are still grappling with delays in Beijing for a variety of reasons.

Liao told Beijing News that some couriers and staff are affected by the epidemic, which is reducing efficiency.

Many online orders are sent outside of Beijing and involve cross-region transportation, which is also affected by the epidemic.

In addition, November and December are the peak season for the parcel delivery sector. The increasing number of parcels combined with other factors related to the epidemic is leading to delays.