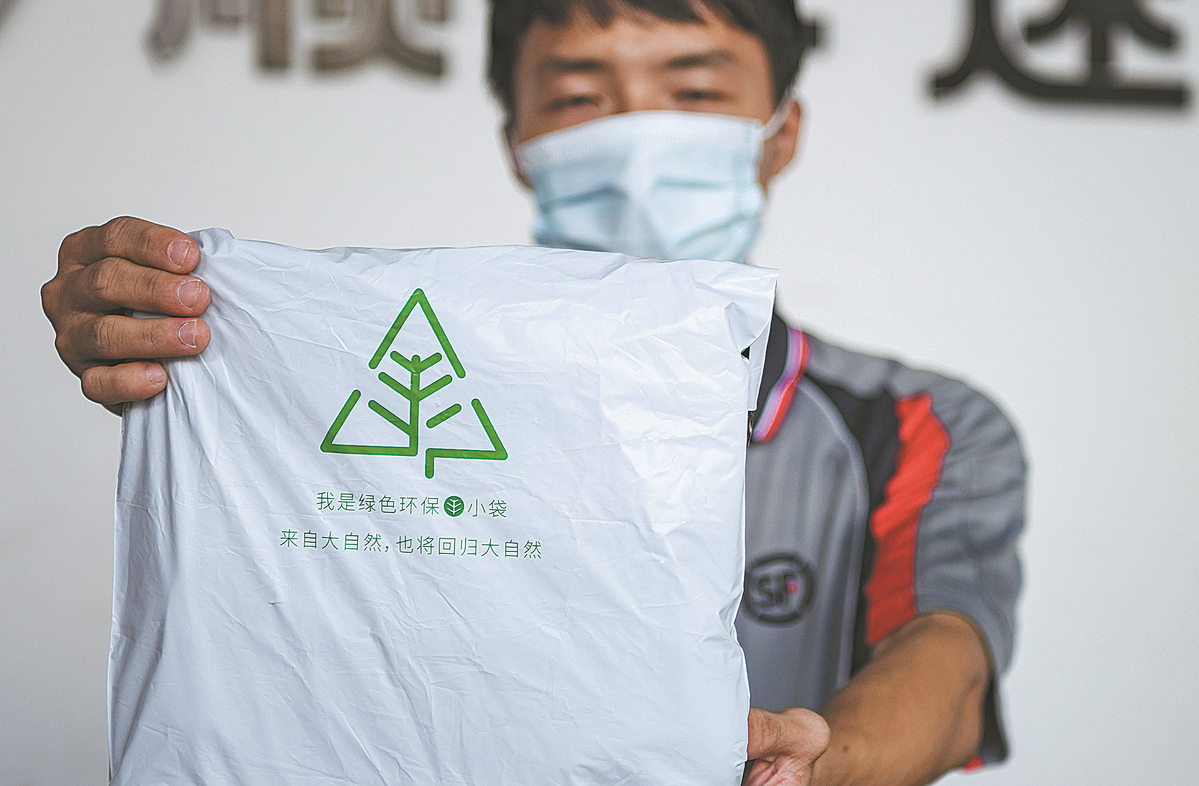 Courier Shi Chunhua has been promoting tape-free packaging to customers.

"They usually did not know about the new product and had some concerns at first," Shi said, adding that he explains to clients that the company is promoting green express delivery and then shows them the stability of the boxes.

"Tape-free does not mean insecurity," he said, adding that products are safe in the boxes.

"Most of my clients are very supportive of the environmentally friendly wrapping strategy after learning the tape-free boxes are as stable and safe as the old wrapping way."

Shi works for China Post in Beijing's Zhongguancun area. Many of his clients are big companies.

"They adopt the greener way well," he said.

Shi and his colleagues received training in folding the boxes correctly to ensure the products won't come out.

However, the huge amount of wrapping materials has brought challenges to the environment.

As China has made a commitment to carbon neutrality before 2060, the industry has carried out greener measures to contribute to high-quality development.

The use of tape-free boxes is one of many ways to promote environmentally friendly wrapping in the express delivery sector.

Hu Hualong, a researcher from the Solid Waste and Chemicals Management Center at the Ministry of Ecology and Environment, said the revised law added new items to solid waste, such as packaging and kitchen waste.

"The central government has encouraged and guided customers to use green packaging and avoid excessive wrapping," Hu said.

In December, central government organs including the National Development and Reform Commission and the State Post Bureau published a guideline to promote green packaging. It introduced measures such as offering incentives to businesses and setting unified standards for green packaging to ensure compliance among industry participants.

Yin Xunguo, head of the State Post Bureau's environmental protection section, said the bureau promotes reductions in the use of packaging consumables and the use of more green and low-carbon packaging materials.

For example, scientific packing methods have been encouraged across the country to cut down on the use of tape. After their implementation, 500 million fewer meters of tape were used last year than in 2017.

In January, the bureau published a guideline to regulate mail and parcel packaging. According to the guideline, logistics companies are responsible for drawing up a packaging standards book and training couriers to wrap packages accordingly to reduce waste.

Before e-receipts were widely used in the sector, customers had to fill in addresses and names on paper and make at least two copies, one to stick on the package and the other for the recipient.

The adoption of e-receipts saves a large amount of paper. Last year, 99.7 percent of packages handled in Hainan province by YTO Express, one of the major express delivery companies, used e-receipts.

Li Changxiang, who is in charge of the company's Hainan office, said new energy vehicles have been put into trial use to transport parcels in Hainan. The vehicles are less expensive to use than gas-fueled cars, Li said.

"It is a win-win solution to promote environmental protection and reduce operational costs," he said.

Nearly all packages from ZTO Express have been using e-receipts. By last year, more than 9 million recycled transfer bags were used in all its transfer hubs and some outlets.

The company has set a goal of building 20,000 stations to collect packaging waste by the end of this year.