SHIJIAZHUANG, Jan. 11 (Xinhua) -- About 25,000 couriers are returning to work to supply daily necessities to stay-at-home residents in the northern city of Shijiazhuang, where more than 200 confirmed COVID-19 cases have emerged since the start of this year. 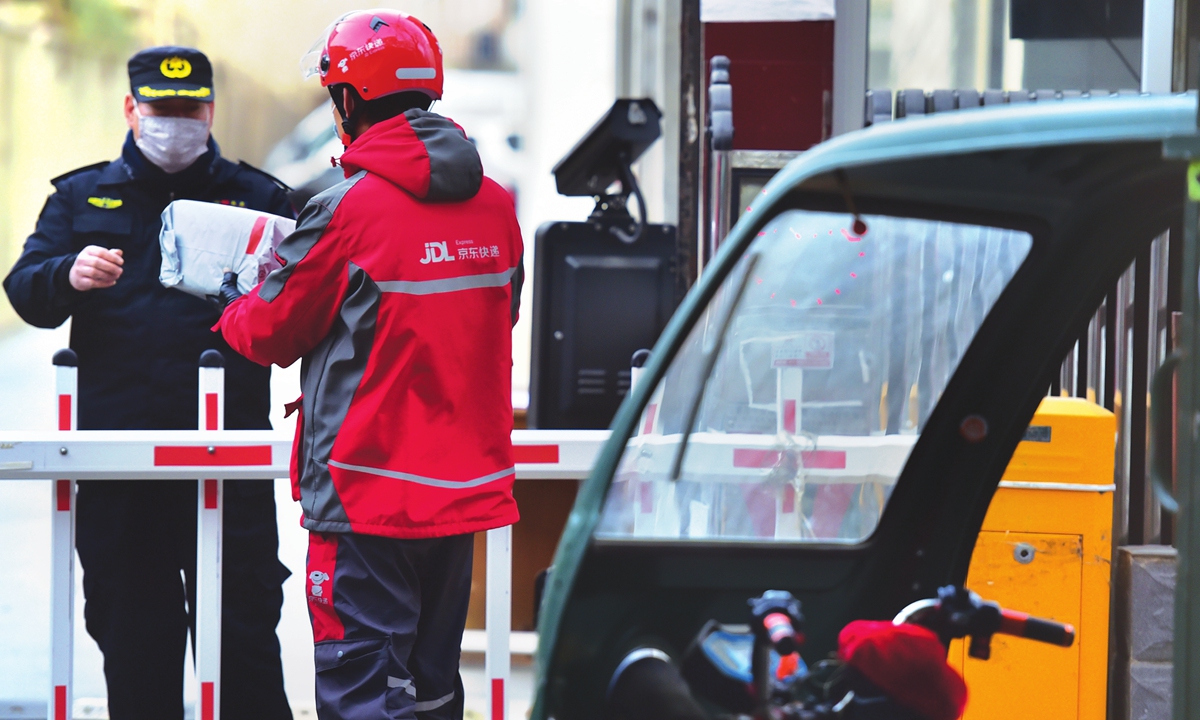 A courier in Shijiazhuang, capital of North China's Hebei Province, hands a parcel to a local community guard on Sunday as the city's delivery services resumed after being affected by local mass nucleic acid testing to try to curb the spread of the coronavirus infections in the city. (Photo: Xinhua)

All residents in Shijiazhuang, capital of Hebei Province, have been told to stay at home to minimize infection risks, while local authorities said efforts had been beefed up to ensure the supply of daily necessities.

Liu Yuan, an official with the postal administration of Shijiazhuang, said the city's courier service basically resumed on Sunday with tightened anti-virus measures, including staff temperature checks and thorough disinfection of postal vehicles and mail.

According to a government notice issued on Saturday, Shijiazhuang has launched a second round of nucleic acid tests among couriers, and those with a negative result and green health code could start working as early as Sunday morning.

At a courier station, Yang Donghai put on a medical mask, single-use rubber gloves and goggles before loading parcels onto his three-wheeler.

"I actually feel proud to be on the front line, to deliver the daily supplies of residents. My family members are a bit worried but they still support my work," said the 33-year-old courier.

Yang described his current work as heavy and pressing, but he remains motivated as "all clients say thank you to me after receiving their parcels, which is more important than anything else."

Authorities also said they have arranged 59 supermarkets and over 300 convenience stores in the city proper to directly supply the over 2,000 residential complexes. A total of 70 supermarkets have answered the government's call by promising not to raise vegetable prices.