The COVID-19 is spreading rapidly around the world with confirmed cases exceeding 200,000 globally and fatalities totaling around 8,900. China believes defeating the virus is a global issue that requires concerted efforts of the international community.

For the first time since the outbreak, the Chinese mainland reported zero domestically transmitted cases on March 18. The number of daily new cases outside of China, which stands at 136,900, is much higher than that inside of the country with 81,235 confirmed cases as of Wednesday.

The experience that China gained from the combat against the coronavirus is costly and China is more than willing to help other nations by sharing its experience in epidemic prevention and control, and sending medics and medical supplies, despite the fact that China itself is still in need of large amounts of anti-epidemic supplies. 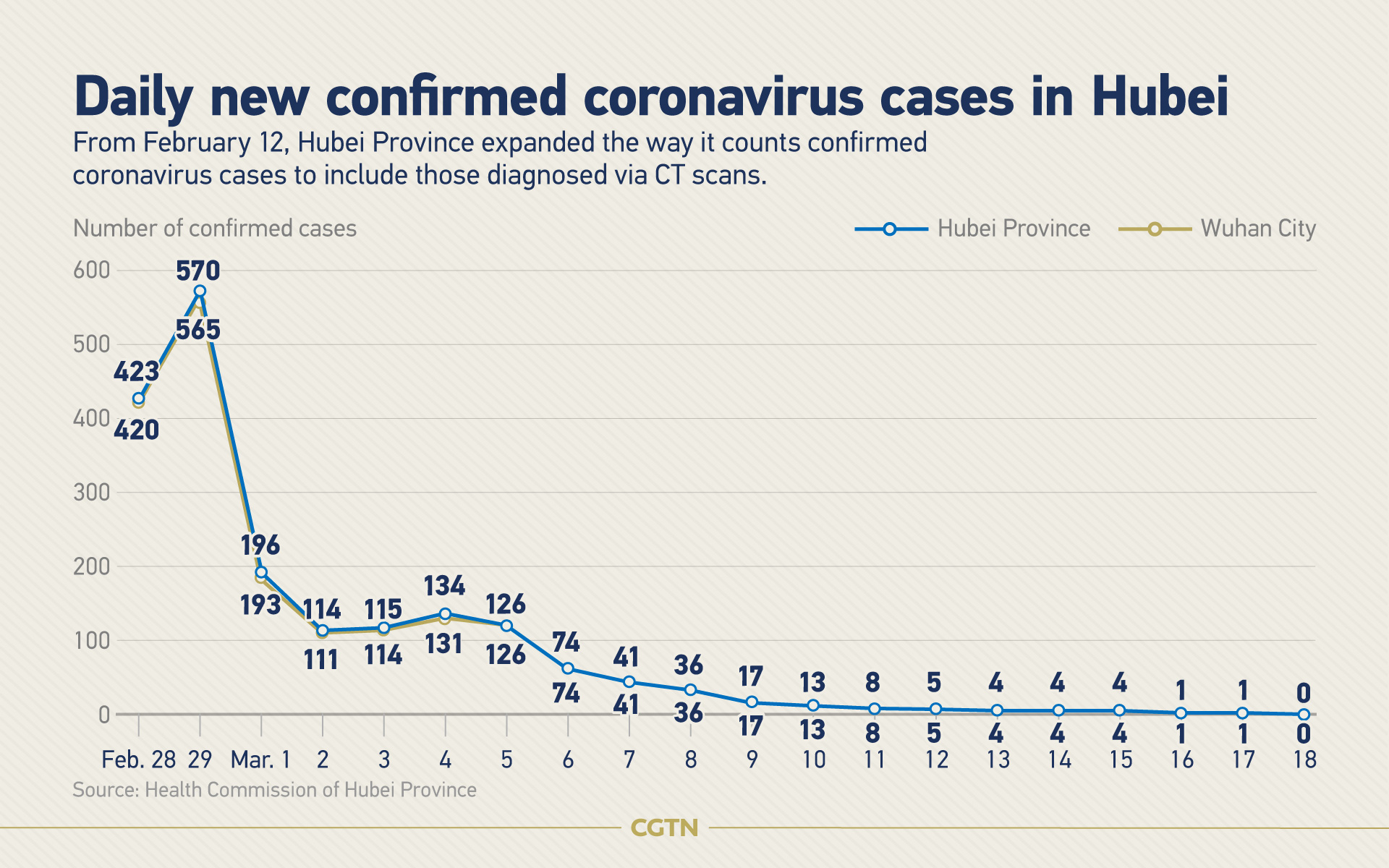 Just on Wednesday, several countries' foreign ministers voiced their appreciation for China, stating that the country has provided or has promised to provide assistance.

In a phone conversation with Dutch Foreign Minister Stef Blok on Wednesday, Chinese Foreign Minister Wang Yi said that China is willing to provide assistance and make arrangements to facilitate customs clearance, transportation and others logistical steps to help Netherlands' procurement demand in China, adding that China is also willing to cooperate with the Netherlands in telemedicine and promote exchanges of medical experts.

French foreign minister also told reporters on Wednesday that China is sending one million surgical masks and gloves to France to help it fight the coronavirus, adding a second batch of medical supplies will arrive on Thursday.

France, which has a shortage of masks and gloves, provided China with some 17 tonnes of equipment after the virus broke out in China's Wuhan Province. Wednesday's assistance is a returned favor to the country.

Poland also announced in a statement late on Wednesday, that China will send 20,000 masks, 5,000 protective suits, 5,000 medical goggles, 10,000 single-use medical gloves and 10,000 shoe covers to the country to help tackle the outbreak.

"Even though the fight with coronavirus is ongoing in China, they decided to show solidarity with Poland and help our country by providing tests to uncover COVID-19, as well as protective medical gear," the statement said. 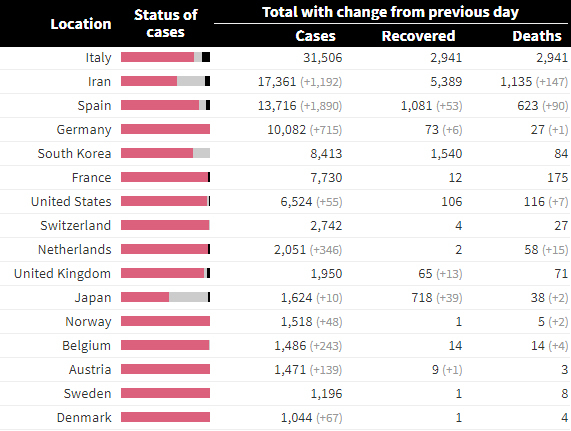 Data of countries that have more than 1,000 confirmed cases. (Photo: Reuters)

It's not the first time that China gives an helping hand to other countries. Since the outbreak, China has taken comprehensive and strict prevention and control measures within its borders, buying time for other countries; and on the other hand, worked with other countries and WHO to combat the disease in a responsible way.

Close to midnight on March 12, a Chinese aircraft landed in Rome carrying nine medical experts and 31 tons of medical supplies including intensive care unit equipment, medical protective equipment, and antiviral drugs. Around the same time, a Chinese truck arrived in Italy bringing more than 230 boxes of medical equipment, less than two days after the Chinese Foreign Minister Wang Yi had promised Foreign Minister Luigi Di Maio of Italy in a phone call, the supplies were on their way.

Italy is the worst-hit country after China. More than 31,000 have been infected so far, with death toll exceeding 2,900. Rome has placed the entire country of 60 million people under lockdown as the cases continue to rise.

China has provided similar assistance to Spain, the second European countries hit severely by the coronavirus after Italy, with more than 13,700 infected cases and 623 deaths. A shipment consisting of 500,000 medical masks donated by the Jack Ma Foundation and the Alibaba Foundation, arrived in northern Spain's Zaragoza on Tuesday one day after the Spanish government declared a 15-day state of emergency.

The Chinese community in Zaragoza also donated 15,123 face masks, 5,544 pairs of gloves and 1,254 bottles of alcohol and disinfectant gels to local authorities.

In ongoing efforts to contain the spread of the COVID-19 in African countries, the Jack Ma Foundation and Alibaba Foundation on Monday also committed to donating 100,000 medical masks, 20,000 test kits and 1,000 protective suits to each of the 54 nations on the African continent.

The medical supplies will be delivered to Addis Ababa, the capital of Ethiopia, where Prime Minister Abiy Ahmed Ali will oversee their distribution to other African countries. The foundations also announced plans to provide online training materials to help medical institutions in Africa cope with coronavirus cases.

Virus knows no borders, but the worst of times reveals the best in people. Wang Yi said in numerous occasions that China will continue to properly handle its domestic epidemic prevention and control and carry out various forms of cooperation with other countries and provide support within its capabilities.

In the war-raging Middle East countries, China has sent experienced medics to Iran and Iraq, provided medical supplies to Egypt, Lebanon, and Syria.

Iran is the worst-affected country in the Middle East region. The coronavirus has killed 1,135 people and infected 17,361 so far in the country and compounding to the difficulties to contain the virus is U.S. sanctions, that hamper medical supplies delivery. China has urged the United States to lift sanctions on Iran immediately, saying continued unilateral sanctions on Iran go against the spirit of humanity and would only deteriorate the situation. 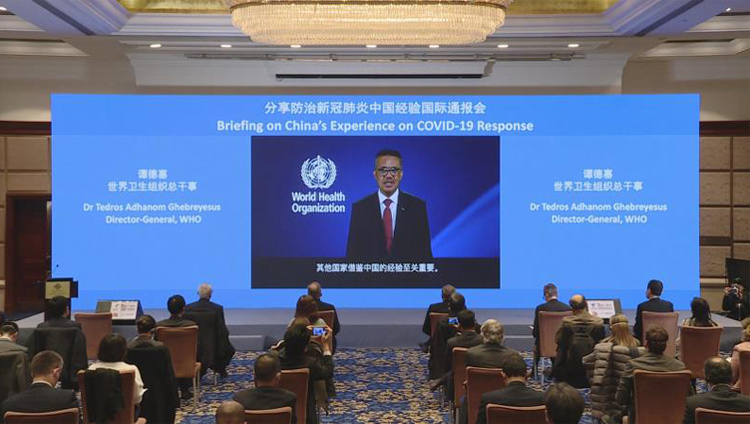 Tedros Adhanom Ghebreyesus, Director-General of WHO, is giving a speech at the Briefing on China's Experience on COVID-19 Responses in Beijing, China. (Photo: National Health Commission)

The list of countries that China has helped and promised to help keeps growing. Through the epidemic, China proves itself, that it treasures the friendship with other countries, and is safeguarding the well-being of humankind.

Aside from helping other countries by proving medics, and medical supplies, China also helps by sharing its research results and experience with WHO and the global community.

China shared the whole genome sequence of the virus with the WHO at an early stage of the epidemic, which facilitated international cooperation on the scientific research on the virus and made it possible to find a cure as early as possible.

China has been publishing the number of new infections, deaths, and recoveries on a daily basis and invited WHO experts to conduct field investigations in Wuhan, the center of the outbreak. The inspection report jointly issued by the Chinese and foreign expert groups has provided important guidance for the international community to prevent and control the epidemic.

Chinese National Health Commission and WHO held a video conference last week in Beijing to share China's experience with about 60 countries. According to Ma Xiaowei, Director of National Health Commission in the conference, Chinese experience on fighting against the virus can be concluded in eight aspects, including a highly efficient conducting system, coordination of the deployment of medical resources, massive use of high technology, and accurate prevention measures.

The English version of the report that China shared with other countries includes prevention and control measures, diagnosis and treatment methods, and collection of practices from experienced provinces and cities. The report took more than 40 days to make and was revised seven times.