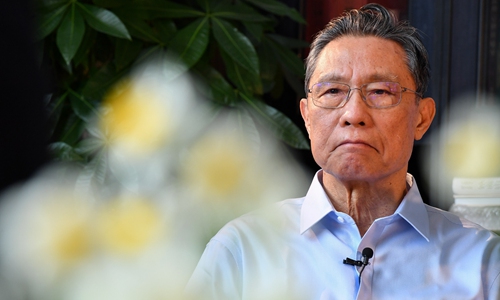 The number of patients infected with the novel coronavirus pneumonia (COVID-19) will likely peak during the second half of February in southern China, while nationwide, the expected high-point should occur in April, said Zhong Nanshan, the central government's top medical advisor.

While new infections are reported daily outside of Central China's Hubei Province, where the outbreak's epicenter Wuhan is located, dropped for 13 consecutive days on Sunday. A statistics model suggested that by the end of February, nationwide infections will have reached 170,000 while actual data as of Monday indicates roughly 70,000, Zhong said on Monday.

"It does not necessarily mean that it will fall immediately after reaching the peak. Reaching the peak refers to accumulated cases or new cases," the expert said, noting the number should peak in late February.

Also, the peak does not suggest an inflection. When asked about the massive labor migration following the Spring Festival holidays, and if there would be another peak, Zhong said, "I think probably not," noting that authorities have adopted strict inspection and quarantine measures, making another outbreak unlikely.

"Also, medical staff have been infected, although the number has largely dropped, the matter affected overall moral," Zhong said and added, "the biggest problem is in Wuhan, and we made a lot of effort but can't completely contain human-to-human transmission."

Zhong noted that if the problem in Wuhan is solved by separating healthy people from patients and dealing with a significant number of suspected patients, it would have a positive influence nationwide.

Hubei Province reported 1,933 new infections on Sunday, with cases in Wuhan reaching 1,690. Total confirmed cases in the province reached 58,182, while the death toll stood at 1,696.

Zhong suggested strengthening two tests. The first, separate the novel coronavirus from the flu, and secondly, increase precision on nucleic acid detection, including the positive-negative test for blood IgM.

"But it does not mean there is no hope at all," Zhong said, noting that research teams have been working to find more effective antiviral drugs, including new progress with Traditional Chinese Medicine and exploring new treatment methods.