CHINA COVID-19 vaccine for emergency use may be ready by September: China CDC director

COVID-19 vaccine for emergency use may be ready by September: China CDC director 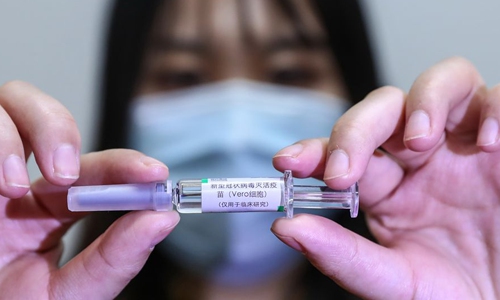 A staff member displays a sample of the COVID-19 inactivated vaccine at a vaccine production plant of China National Pharmaceutical Group (Sinopharm) in Beijing, capital of China, April 10, 2020. (Photo:Xinhua)

A COVID-19 vaccine could be developed by September, and could be ready for emergency use on medical workers and on a larger group of people early next year, said Chinese Center for Disease Control and Prevention (CDC) Director Gao Fu on Thursday.

If the pandemic sees another massive outbreak, the vaccine, which is under Phase II or Phase III clinical trials, could be applied on particular groups, such as medical staff, Gao said in an interview with CGTN.

According to Gao, China could have a vaccine for emergency use in September, and it could be administered more widely early next year.

China now has two potential vaccines under clinical trials - one is an adenovirus vector vaccine, the other is an inactivated vaccine. The latter is in the second or third phase of its clinical trial, Gao said.

"The development of vaccines needs time. It depends on the situation because it will be used on healthy people," he noted. "People have learned from past experiences. We know which strategies to develop vaccines work."