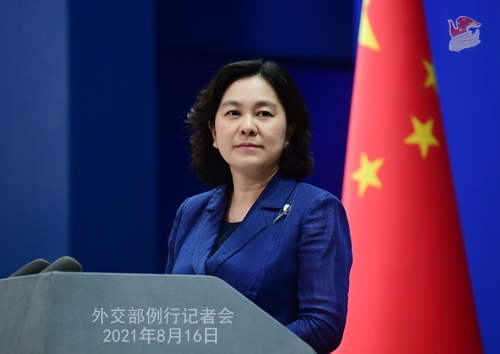 BEIJING, Aug. 16 (Xinhua) -- The tracing of the origins of the COVID-19 virus is an important matter that must be led by member states of the World Health Organization (WHO), a Chinese Foreign Ministry spokesperson said Monday.

Spokesperson Hua Chunying made the remarks at a daily news briefing when asked to comment on the WHO statement issued on August 12 concerning the origin tracing of the COVID-19 virus.

She said China noted the WHO statement on advancing the next series of studies to find the origins of the virus, which stresses that the next-phase studies should be built on the first phase of studies and implement the recommendations outlined in the China-WHO joint study report.

The statement also says the origin tracing should be based on science, rather than be an exercise in finger-pointing, or political point-scoring, Hua noted.

"These views should be followed through in the relevant work of the WHO," she said.

Hua pointed out that the WHO is led by its member states. The origin tracing is of great importance and must also be led by WHO member states.

"The WHO Secretariat should act on the WHA resolution, conduct thorough consultation with member states on the global origin-tracing work plan, including the follow-up mechanism, and fully respect the views of member states," she said.

"Very importantly, the plan for origin-tracing involving a particular country must be decided through consultation with the country concerned, as it provides the basis for effective cooperation to be conducted," the spokesperson added.